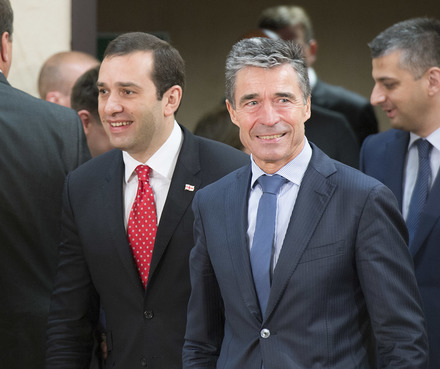 TBILISI, DFWatch–NATO’s Secretary General Anders Fogh Rasmussen promises that Georgia’s progress will be assessed at the upcoming NATO Summit in Wales, but stops short of saying what the outcome might be.

Many Georgians had reckoned that their country would finally be granted a Membership Action Plan (MAP) this September, but after German Chancellor Angela Merkel’s recent statement that Georgia won’t get a MAP this time around, the issue has again become a hot topic in Tbilisi.

During a meeting of NATO defense ministers in Brussels June 3-4, the Secretary General was asked a few times how Georgia’s progress will be assessed at the upcoming summit.

At the final press conference Anders Fogh Rasmussen said he cannot answer this question, as no timetable has been discussed yet.

“We have noted significant progress in Georgia when it comes to defense reforms and also broader reforms of the Georgian society,” he said, “and that progress has been acknowledged at today’s meeting. But we also realize that there is more work to be done.”

He continued saying that at the end of the month foreign ministers will meet and discuss what progress each aspiring country has made, after which decision will be made how to address the open door policy at the upcoming summit, but it is too early to answer that question.

Rasmussen also couldn’t say what alternative instrument to a MAP there is for Georgia.

“We have four aspirant countries. Each of them will be treated individually based on their merits, so to speak, based on the progress they have achieved.”

Within the frames of the meeting of ministers, Georgia’s Defense Minister Irakli Alasania met with Rasmussen at the NATO headquarters. They discussed reforms conducted in defense, as well as Georgia’s participation in the ISAF mission in Afghanistan and Georgia’s involvement in the post-ISAF mission.

June 4, the NATO-Georgia Commission met on the level of defense ministers.

“The crisis caused by Russia’s aggression against Ukraine has repercussions for Georgia, its region, and Euro-Atlantic security,” the Secretary General said at the opening of the commission session.

“NATO Allies do not, and will not, recognize Russia’s illegal annexation of Crimea. And neither do we accept Russia’s recognition of the South Ossetia and Abkhazia regions of Georgia as independent states.”

He also said that NATO stands by the decision made at the Bucharest summit in 2008 that Georgia will become a member as soon as it fulfills the requirements of membership.

“I am confident that our next summit will recognize Georgia’s progress,” he added.

Alasania said after the session that this meeting of the NATO-Georgia Commission was one of the most successful for the last few years, and that all allies agreed that Georgia’s success will not only be declared at the upcoming NATO summit in Wales, but concrete, effective and practical steps will be taken for strengthen Georgia’s defense capabilities.

“This agreement and consensus is a very important basis in order to see more NATO presence in the region after the next summit. The most important goal is to strengthen Georgia’s defense capabilities,” he said.

During a recent visit to Germany, Prime Minister Irakli Gharibashvili met with the Chancellor Angela Merkel, who said that Georgia will not be offered a MAP at the next summit, but that there are many other ways to express that Georgia is a good partner and its progress is visible.

At a press conference on Wednesday, the PM avoided to answer why, according to Merkel, Georgia won’t be offered a MAP this time. Instead, he criticized the former government for giving people ‘false expectations’.