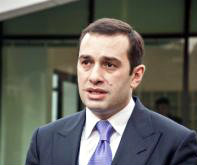 TBILISI, DFWatch–The Georgian government is unable to say specifically what Barack Obama’s initiative to boost the military capacity of non-NATO partner countries will mean and how the US will assist Georgia, but they welcome the initiative.

During the June 3 session of the NATO-Ukraine Commission in Brussels, Obama said the US pledges one billion dollar for military reinforcements in Eastern Europe. He also mentioned Georgia.

“The program is designed to bolster the capacity of countries including Georgia, Moldova and Ukraine to better work alongside the US and NATO as well as to provide for their own defense.”

Obama will ask the US Congress to allocate one billion dollars for this initiative.

But government officials are unable to say what type of assistance is foreseen for Georgia and in which areas.

According to Defense Minister Irakli Alasania, who attended the session when Obama announced his initiative, explained that it is about providing military armament for Georgia and strengthening the country’s military capability.

“After the NATO-Georgia Commission session, I can draw the only conclusion after the summit that our country will be more protected with the proposal from NATO and specifically from US President Obama,” Alasania said.

“It is about supplying Georgia with military armament and strengthening the military capability of the country.”

However, he also said that it is just his assumption and he has no specific information about the proposal.

“In my opinion, this will be a historical moment for our country’s relation with NATO, that the emphasis shifts from declaratory type statements to specifically increasing defense ability on our territory in Georgia,” the minister said.

He added that this will be important for people and for the army, which is ‘in fact compatible with NATO.’

“What’s important we will have deterrent function.”

A Defense Ministry’s spokesperson told DF Watch that the ministry currently is unable to offer more details about this issue.

When Irakli Alasania visited the US about a month ago, he said NATO would place missiles in Georgia. He was criticized for this by the president, the secretary of the Georgian National Security Council and members of the ruling coalition for making a statement about it without consulting with government members first.