Rally in Tbilisi in solidarity with the Ukrainian people

Rally in Tbilisi in solidarity with the Ukrainian people 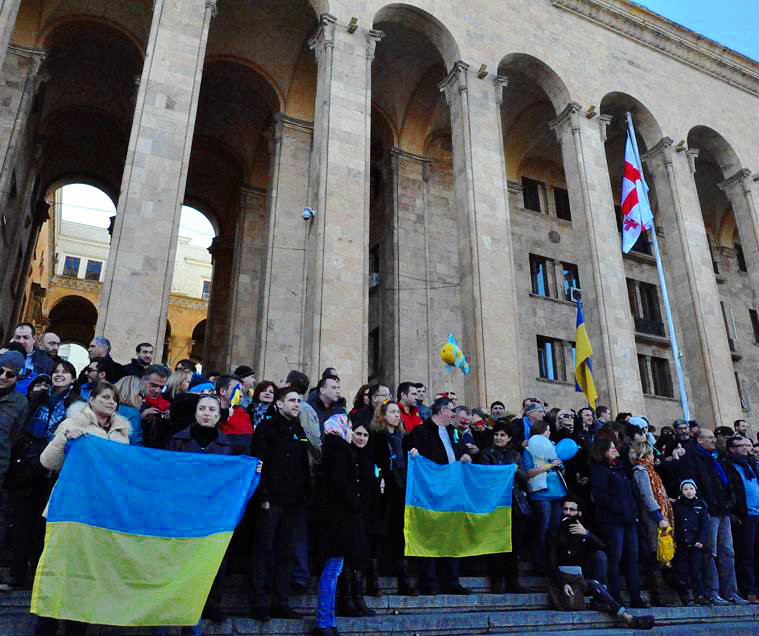 People rallied outside the old parliament building in Tbilisi to show support for the Ukrainian people. (Photo: Elene Khachapuridze.)

TBILISI, DFWatch–Tens of people gathered on Sunday in Tbilisi wearing yellow and blue to support people in Ukraine and express solidarity with them after a violent dispersal in Kyiv.

“Our Ukrainian friends need support, they mustn’t be alone facing impudent violence,” organizers of the rally, which was planned via Facebook, say. “We must stand together and encourage them and show that we are with them.”

Students, elderly people, Ukrainisn citizens, and passers-by gathered in front of the old parliament building in Tbilisi on Sunday and sang the Ukrainian national anthem.

Organizers also started collecting online signatures to a petition expressing solidarity with Ukrainian people against government’s ‘abrupt move to freeze integration with the West and tilt toward Moscow.’

“You fight not only for your country’s European future, but also for all of the post-Soviet society who are willing to escape from the influence of imperial Russia,” the petition reads.

Giorgi Vashadze, MP from the National Movement who attended Sunday’s rally, said that it is principally important for Georgia to stand together with Ukraine.

“We must reinforce European choice of Ukraine from Georgia, because I do not exclude we might need the same support from them,” he said adding that Georgia has very difficult year ahead.

More than a week ago people demonstrated outside the Ukrainian embassy in Tbilisi to express solidarity.