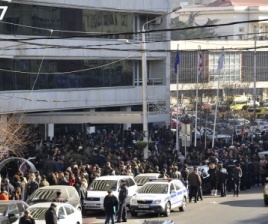 Environmentalists say it’s against the law to build a new hotel in a recreational zone, like Vake Park. (Interpressnews.)

TBILISI, DFWatch–People Friday demonstrated in front of Tbilisi City Hall against a private company’s plans to build a new hotel inside the publicly owned Vake Park in the capital.

Behind the project is Tiflis Development Company, and the hotel is planned at the location of an old closed-down restaurant called Budapest.

Environmental activists consider it illegal to construct what they claim will be a seven-storey hotel inside the park because it is a recreational zone, but City Hall says the property where the new hotel is planned is privately owned and not part of the park.

Opponents of the project mobilized supporters outside Tbilisi City Hall Friday for speeches and a small concert that lasted several hours.

They have written a complaint to Tbilisi City Hall, and also want to block the project by going to court, and demand a stop in the construction work until the court has made a decision.

But during a meeting with representatives of Tbilisi City Hall, the negotiations ended without results, so there will not be a halt in the construction work.

Tbilisi City Hall claims the construction is legal and that the location of the new hotel is private property.

Acting Mayor Sevdia Ugrekhelidze said permission has been granted and claimed that protesters are poorly informed because the area where the restaurant Budapest lies is not part of Vake Park. She also says that new hotel will have five floors.

Well-known Georgian singers and bands like Z for Zulu, Gravity, Me and My Monkey, Shota Adamashvili, Bakur Burduli and others performed at the protest concert.

Erekle Urushadze, member of Partizanuli Mebagheoba (Guerilla Gardening), which organized the rally on Friday, explains that it is illegal to construct something inside a recreational zone, which the location of this new hotel is. Tbilisi City Hall has the right to make exceptions from this rule, but only if the construction is not against the public interest.

Protesters claim City Hall abused its right to grant permission for a construction which will destroy the recreation zone that Vake Park represents, a park that every weekend is teeming with joggers, families and others.

Minister of Environment Khatuna Gogoladze said the same day that she is also against the construction of the new hotel. She says Tbilisi is densely populated, with a rapidly growing traffic. When planning new development under such conditions it is important to preserve the city’s recreational zones, she said.

Gogoladze said she thinks there shouldn’t be new construction projects in the central districts, and that green zones should be maintained if possible.

As rally participants plan to continue their campaign until a halt in construction work, some supporters abroad are posting videos to show how well European cities are taking care of their green lungs.

From Berlin, Luka Bakradze shows scenic views from Tempelhof, a former airport recently made into a park area, and Tiergarten, a large park preserved in the center of the German capital.

One Georgian living in the Norwegian capital Oslo also posted a greeting from Frogner Park and displayed the sculptor Vigeland’s famous statues, where he said they would never cut down trees to build a hotel.