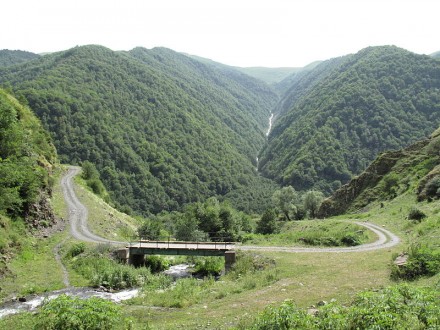 TBILISI, DFWatch–Pshavi, the historical and cultural province of eastern Georgia, might soon be granted the official status of a Protected Landscape.

Pshavi is located in the mountains of Mtskheta–Mtianeti region alongside the Aragvi River, on the way to the historical region of Khevsureti which is located close to the border with Ingushetia and Chechnya. It is famous for its distinct traditions with pre-Christian elements. It was also the birthplace of the distinguished Georgian poet, Vazha-Pshavela.

The chairman of the Agency of Protected Areas, Lasha Moistsrapishvili said in a conversation with the Kakheti Information Centre (ICK) that the government has started researching and evaluating Pshavi’s eventual inclusion in the programme.

“The government of Germany is assisting the development and evaluation of the regions of Pshavi and Khevsureti. Baseline surveys were conducted and a draft is being prepared for discussion with experts. The draft will then be taken to the government level,” Moistsrapishvili said.

The Protected Landscape status differs from other forms of area protection in Georgia, such as national parks or reserves, in the way that it permits the sustainable use of natural resources and development of eco-tourism in order to contribute toward conservation objectives. This corresponds to Category V according to the classification by the International Union for Conservation of Nature (IUCN).

Currently, there are two mountainous regions enjoying the status of Protected Landscapes: Tusheti in Kakheti region and Kintrishi in Adjara.

In 2014, the Georgian government officially transferred forest management control of the Tusheti Protected Landscape to the local administration. It was the first case of decentralising forest management in Georgia and the first time forests in Tusheti have been under local control since before the Soviet period began in Georgia in 1921.