Protesting the destruction of an old square in Tbilisi

Protesting the destruction of an old square in Tbilisi 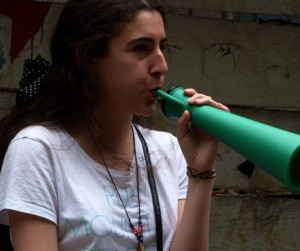 TBILISI, DFWatch – The protest continues against the construction work on a historic square in Tbilisi, after workers Saturday started demolishing an old building, apparently without a permit.

Witnesses called police, and the work stopped for a while. Several months ago, groups started demonstrating in defense of the historic Gudiashvili Square in downtown Tbilisi. The city’s authorities have decided to renovate the square, but there is concern that its historic qualities will be lost in the process.

Most non-Georgians will probably know the square as the location of the retro café Pur Pur. It is surrounded by around ten buildings, as well as cultural and historical monuments, all in poor condition and sorely in need of reinforcement to keep them from falling to pieces.

What started the protest was when City Hall announced a tender for companies to restore the square. The process has been marked by a distinct lack of information, and what little information there was only reinforced the impression that the city was prepared to sacrifice the authenticity of the last historically intact square in Old Tbilisi.

Almost every Sunday, hundreds of people have gathered on the square even in the cold of winter night to make sure the buildings are not destroyed.

But City Hall signed an agreement with a company called Irao Magnat Gudiashvili. They gave a promise to be open about their restoration plans and vowed to work together with people. After this, the protests stopped.

Things have been quiet for a while, but Saturday it became clear that the developer Irao has not been idling, as workers started demolishing one of the oldest buildings. It used to house the newspaper Literaturuli Sakartvelo (Literature Georgia). In 2007, Tbilisi Supervision Service forced the editorial board out of building and removed the furniture. 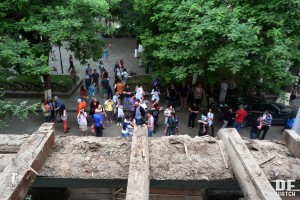 Now the roof of the building is partly dismantled. Witnesses took video of workers carrying out the demolition work.

However, representatives of Irao Magnat Gudiashvili refused that the building is being demolished, but say it is only being prepared for restoration.

But if this is the case, campaigners argue, all the pieces of the building should be numbered as they are dismantled, which does not appear to be happening. DF Watch went inside the building to have a look. It is barely able to stand on its foundations, and a visitor gets a feeling it is dangerous to walk on the worn down floors and between walls that are full of cracks. There are hammers and axes laying around, also helmets and uniform. Downstairs there are old film rolls lying around on the floor, together with some documents dated 1976. The yard behind the building is full of pieces of wood, which have been removed from the roof and upper floors.

On Sunday, the organization Tiflis Hamkari organized a gathering to protest the demolition work. People showed up carrying posters and whistles and kept up the whistling for more than hour.

Later, organizers met with representatives of Irao Magnat Gudiashvili, who didn’t present plan for the restoration works, but some uncertain images promising that it will be an example of how to do restoration of old buildings in the city. Again they denied that workers are demolishing the building, but promised that they would patch up the roof. 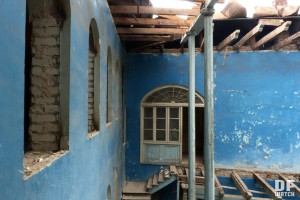 The architect and restorer Merab Bochoidze published a letter addressed to the head architect for the project, in which he writes that he has broken off cooperation with the developer.

“Yesterday, on May 19, there started and was conducted so-called demolition of balcony constructions and architectural details of building number two on Gudiashvili.

I underline that such actions don’t have anything in common with the most basic principles of restoration, but totally contradicts it,” he writes, “this is a very bad act committed against the cultural values of our country.”

People stayed on the square until night in order to prevent workers from continuing work which they consider illegal.