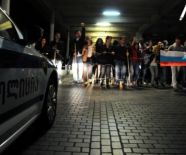 Police prohibited them from blocking the road with wires, so they placed them on the side walk.

People gathered at the PM’s house claim they will never accept the recent actions by Russian soldiers, who are installing razor wire and moving the border further into Georgia-controlled territory, making the locals cut down their trees and dismantle their houses.

“None of the government officials have been to Ditsi and Dvani or made statements in support of the local population,” said one of the protesters. “They are insulting the Georgian people with their inaction.”

The protesters sang the Georgia national anthem and called on the prime minister to react to what they say is a creeping occupation.