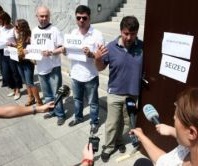 TBILISI, DFWatch – Representatives of Georgian media Friday demonstrated in front of the chief prosecutor’s office in Tbilisi against the seizure of satellite dishes belonging to Maestro TV.

The government sequestered Maestro’s satellite dished on June 20, accusing the TV company of attempting to bribe citizens into voting for the opposition Georgian Dream coalition. According to GYLA, Maestro was unfairly treated.

“These dishes broadcast not only oppositional, but pro-governmental channels too. So people can get varied information. We brought one dish to the president’s residence and wanted to give it as a gift to President Saakashvili, so he could install it and watch all the channels. But they rejected our gift and said it was a bribe,” Basa Janikashvili, one of the founders of Radio Utsnobi told DF Watch.

The organizers brought a door, with the poster “seized”. That’s how the organizers see the sequestered property of Maestro and they think that the prosecutor’s office should be seized too.

Head of Maestro Ilia Kikabidze said the meeting is not only to support Maestro, but for all free media, and for people’s rights.

Lasha Tughushi, editor in chief of the newspaper Rezonansi and one of the organizers of the rally said that the seizure of Maestro’s satellite dishes is against free media and freedom of speech and freedom of expression. He added that the campaign will not stop until the property of Maestro is back with its owner.