Protest for drug liberalization leads to detentions in Tbilisi

Protest for drug liberalization leads to detentions in Tbilisi 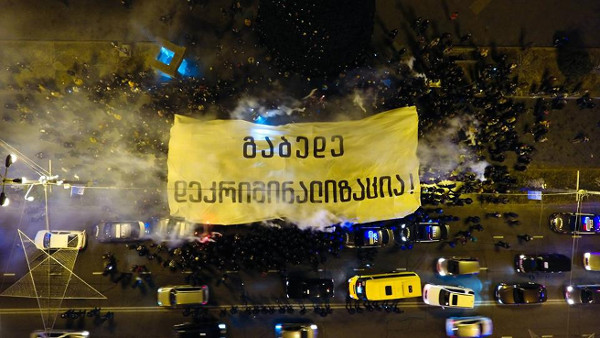 TBILISI, DFWatch–A protest against Georgia’s strict drug policy led to clashes with police and two people being detained in Tbilisi on Saturday.

Protesters gathered in front of the parliament building on Rustaveli Ave in Tbilisi to demand a softer drug policy.

When the protesters decided to block the street, police moved in and dispersed them. Two activists were detained for resisting the police; an administrative offense. The detainees were released the next day.

The group behind the demonstration, White Noise Movement, advocates the liberalization of drug use. It wants to decriminalize the use of drugs and replace the punishment approach with a health-care approach.

“The main demand of this rally is that the government must announce decriminalization as a declared direction for the drug liberalization process and immediately begin working on softening the punishment [for drug use],” White Noise Movement said in a statement.

The day of the protest was not chosen at random. December 10 is the International Human Rights Day.

“This should be the day we end a ten year long repressive drug policy.”

Journalists spotted MP from Georgian Dream Levan Gogichaishvili among the demonstrators, as well as politicians from opposition parties.

“They have lost this war, decriminalization is inevitable,” one of the activists said during the rally after the police arrested two participants.

The protesters who were detained will have their court hearing on December 29.