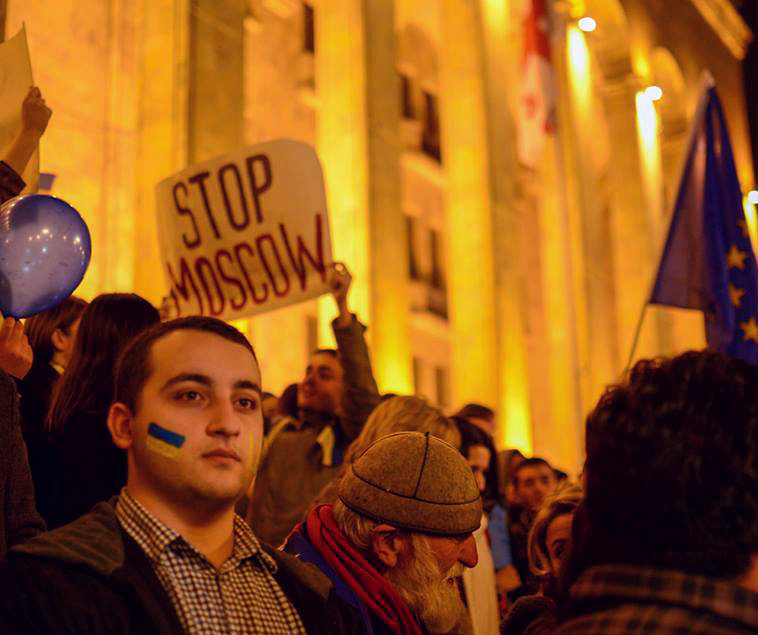 TBILISI, DFWatch–People rallied in Tbilisi again Monday in support of the Ukrainian people.

As on Sunday, they gathered in front of the old parliament building, and vowed to continue protesting and also hold support rallies in other parts of Georgia.

Participants brought Ukrainian flags and wore yellow and blue and carried posters with messages of support to Ukraine and its European choice.

Hundreds of students, politicians, NGO representatives, Ukrainian citizens and other tourists came to express solidarity and support for Ukraine’s Euro-integration, and to condemn Russia’s actions.

“Our Ukrainian friends need our support. They are now under terrible pressure. We have to stand by them, to give them courage and hope,” participants of the rally say. “We cannot stay quiet when we see violence and intimidation.”

The Ukrainian singer Ivana Melai also came to the rally in Tbilisi.

“I am Ukrainian, but unfortunately I cannot be in Ukraine on Evromaidan,” she said on Monday. “In Ukraine and here we observe that we want to be in Europe and we want to change the government because of what it has done during the last three days.”

She said she wants everything to end peacefully without bloodshed and she wants to see Ukraine in the EU.

Political commentator and ex-minister Ghia Nodia and other National Movement supporters came to the rally, as did members of the New Rightists Party, and the writer Dato Turashvili.

The solidarity rally will continue in Tbilisi on Tuesday at 18:00 and the same time in Kutaisi, Georgia’s second largest city.