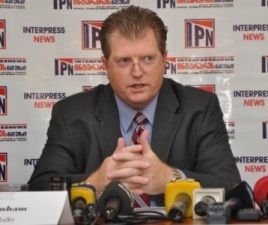 Terry Benham and other representatives of the NGO Committee for Open Democracy found many voters registered on addresses at which there turned out to be nobody living. (IPN.)

TBILISI, DFWatch – An American pro-democracy group says it’s questionable whether there is rule of law in Georgia.

The non-government organization (NGO) Committee for Open Democracy said at a press conference on Friday that the organization will have 20 observers here for the upcoming parliament elections.

They will soon go through all the necessary procedures for registration at the Central Election Commission.

Executive director Brian Mefford said Committee for Open Democracy is non-commercial and is dependent on donations. It is observing elections in Georgia and Ukraine.

Representatives of the group say they arrived in Georgia not to criticize the government or the opposition, but to give advice to political subjects to follow the rule of law.

According to the group, the main problems are inaccuracies in the voter’s list, the many fines issued to companies and individuals for breaking new strict campaign finance rules and selective application of the law.

Tens of international organization have indicated there are still problems with the accuracy of the voter’s lists. They also point to the amount of political fines, expert from Committee for Open Democracy says.

He presented several photos which shows ruins on three streets in Tbilisi Center and said that 46, 42 and 8 voters are registered on those places. Terry Banham underlined that they discovered this inaccuracy last month and expressed hope that now it is corrected. He also noted that lately, there have been issued large fines and the law is used selectively in certain cases.

As an example he named the fining of Kakhi Kaladze, a former AC Milan player, who is now presenting the Georgian Dream coalition. The organization warned that such cases are really harming the whole election process.