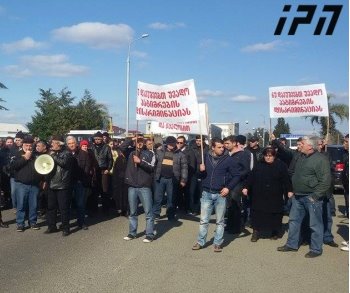 TBILISI, DFWatch–Family members and relatives of 55 prisoners with life sentence who claim being on hunger strike during almost a month, rallied on Sunday outside notorious Gldani No 8 jail in Tbilisi outskirts, demanding reducing their terms and better conditions for inmates.

A parallel rally also was held in Kobuleti, a Black Sea resort, by relatives of Gldani and Rustavi prisons inmates.

They demand relieving sentences of prisoners citing that the mass amnesty of January 2013, soon after changing the government, that slashed prison population by about 60 percent and reduce terms to many other inmates, didn’t affect those with life sentence.

If not heard by authorities, the relatives warn to hold permanent rallies. They plead to the president, the prime minister and the public defender to review their cases individually.

Gocha Kontselidze, brother of one of the prisoners, told journalists during a rally in Kobuleti that government promised to revise 81 cases of prisoners with life imprisonment and discuss this issue in parliament as well, but the promise hadn’t been fulfilled.

They’ve blocked the bridge on river Kintrishi in Kobuleti for about five minutes. They also want from appropriate bodies to ensure proper healthcare for the prisoners who, they claim, are on a hunger strike for almost a month.

Penitentiary officials haven’t yet commented on the issue. Representatives of the Public Defender’s office came on to the rally saying that the office studies this issue and its employees check on the prisoners’ health and living conditions daily.

Zviad Koridze, a prominent journalist and media expert, who chairs the Pardon Commission subordinate to the President, told Channel 1 of the Public Broadcaster there are only seven prisoners who served 15 years of necessary term that gives the commission formal grounds to review their cases. The Commission has reviewed seven cases, but none of them got a positive recommendation that enables the President either to fix their terms. Other cases will be reviewed during future meetings of the commission.