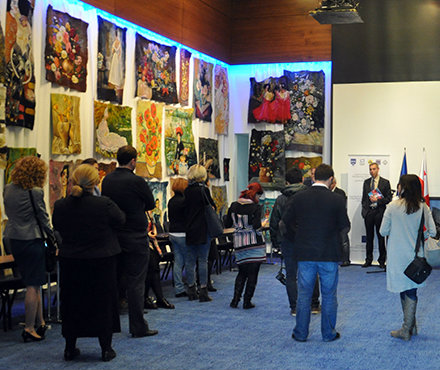 TBILISI, DFWatch–Handicraft made by prisoners went on sale at an exhibition at Radisson Blu Iveria hotel in Tbilisi on Friday dedicated to the International Day for Elimination of Violence against Women.

The works at the exhibition ‘Creation Work for Dignity’ were made by female prisoners, ex-prisoners and probationers.

Maia Samnidze has participated in the exhibition several years in a row, and a large share of this year’s selection was works by her. 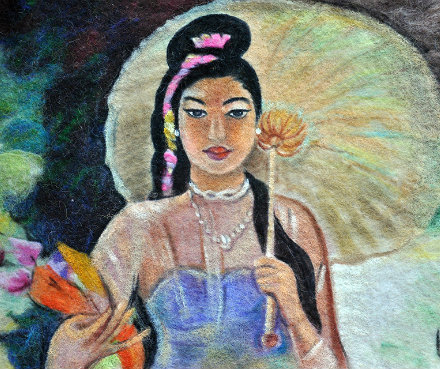 She explains that she started studying art when she got into prison and was counting the days spent there.

“I was happy to realize that my job was waiting for me the next day,” she writes in the small catalogue accompanying the exhibition.

Eliso Miminoshvili, whose works were also shown at the exhibition, stepped up to the microphone to thank everyone who had come to see or buy her works and said she feels happy with the work she is doing.

Among the guests at the exhibition were representatives of the EU and UNDP who expressed concern about recent reports of violence against women. There has been a vigorous debate about the problem in Georgia since early this year.

As usual, the exhibition was organized by the organization Women in Business, which has set up a small sewing workshop at the women’s prison (No 5) in Rustavi with EU funding. The organization has also organized a fitness center and carried out other projects.

According to Women in Business, more than 500 prisoners, probationers and ex-prisoner women have taken part in its training programs.

The works exhibited on Friday were made of felt, quilt cotton, tapestry, batik and leather.

In her letter, Samnidze writes that unlike the brushes, felt obeys you during the creation process and you can feel the wool.

“It has amazing features. Today it’s different, tomorrow it’s flourishing, then it changes its color.”

Most of the felt works are reproductions of well-known foreign and Georgian painters. Some of them are expressions of their imagination. Other subjects are icons from Orthodox Christianity.