Prisoner participates in singing contest, is pardoned and given car

Prisoner participates in singing contest, is pardoned and given car 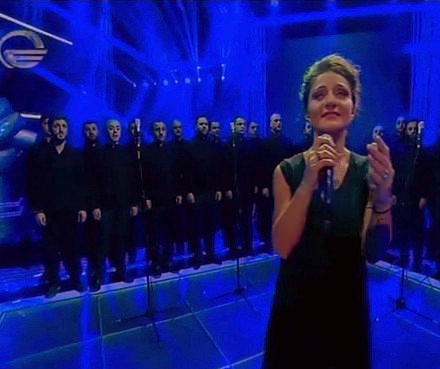 TBILISI, DFWatch–A woman who has twice been convicted of robbery is a participant in the talent show Voice of Georgia. Tuesday, she was told live during the show that she has been pardoned and given a car.

The Voice accepted Teona Kolbaia during casting at the 5th prison facility a few months ago. As she advanced through the contest, she was given singing lessons in prison, and shuttled to Tbilisi to take part in each new round.

On Tuesday, Prison Minister Kakha Kakhishvili appeared live on stage and announced that Kolbaia has been pardoned. Before his announcement, Kolbaia performed the song ‘Kyrie Eleison’, written by Patriarch Ilia II.

“The guards will not drive you back to take your personal items from jail. We will give you a car which will help you,” the minister told her.

He said that he wishes for more people to return to their families.

May 5, 2012, police arrested Kolbaia for the second time, along with Temur Batsashvili, who also had been convicted in the past.

The two used to rob taxi drivers with toy guns. They had selected a place to stop taxis, and asked to be driven to a deserted place, where they forced the driver to give them his money, mobile phone and car, threatening him with toy guns. They also allegedly stole 250 laris from a convenience store.