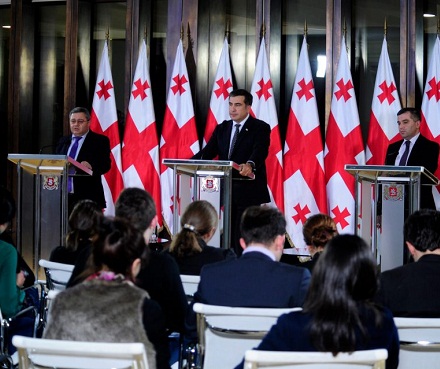 TBILISI, DFWatch–The president and the speaker of parliament Monday emerged after an hour-long meeting and agreed that it had been a productive one, although the only thing they agree on was that agreement is necessary on important issues.

Speaker of Parliament Davit Usupashvili, and his predecessor from the president’s party, Davit Bakradze, Monday evening visited Mikheil Saakashvili at his palace for consultations.

The meeting was precipitated by increased political tension after violent clashes outside the National Library on Friday, where the president was planning to hold his annual address to the nation; an improvised solution after parliament decided to postpone the address. After a violent incident at the entrance, Saakashvili moved the event to his palace.

Monday, the president again expressed concern about the Friday events, saying that both parties are interested in not letting such incidents be repeated.

“This is our principle position and Mr Davit shares our concern,” he said, adding that he cannot say that they agreed on everything.

“They have their own position, we have ours and we think discussion will continue. There will be reviews inside the minority and inside the majority as well, with the prime minister.”

The joint briefing held by the three turned into a debate between Usupashivli and Saakashvili.

The Speaker of Parliament also said that no agreement was achieved today, but the process of negotiation has a perspective.

“There is a feeling that the dialogue that is started has a perspective and this is not PR by any party,” he said, adding that both parties have wanted to find a solution to problems.

Usupashvili thinks the issue of constitutional changes about the powers of the president is ‘key to achieving agreement on all other issues.’

“I will not and cannot speak of details, but in the process of conversation new schemes were noticeable and it is necessary to think.”

The president wanted to once again sum up the meeting, but he said that in France it is common that the prime minister goes to the president once a week to discuss important issues, and Georgia’s constitution is closest to the French model.

“There are barely 200 politicians in Georgia, what 200 political prisoners. Those people arranged massive beatings…”

“Did we come here for this,” Davit Usupashvili interrupted.

“I’m sorry… This is what people care about,” the president continued, adding that the prime minister should have come.

“So he should have come here?”

“I hope he will come in the future.”

“Of course he will.”

The president repeated that the government is putting pressure on his National Movement party, the parliamentary minority.

“Let him be kind to come here and get involved in this process and continue the talks.”

“Let’s just answer questions or then debate, Mr President, but if we are at TV debates, I’m ready.”

Even though Usupashvili stopped him several times, the president continued talking about pressure against his party. Then he said it is necessary to achieve a consensus agreement on constitutional changes backed by all 150 votes.

Saakashvili said it is a principle for him and his party that parliament remains in Kutaisi, and he will not come to any other place but Kutaisi.

Usupahsvili ‘calmed’ him down saying that this issue cannot be solved until November and by the time he won’t be a president anymore.

“Oh, the first good news, what a good news for Kutaisians if it really will remain in Kutaisi,” president said.

“Yes, you have put previous parliament condition is such condition, that it will need at least six months for fixing,” Usupashvili responded.

“I’m happy that parliament will remain in Kutaisi for [several] more months and that I will get to go to this beautiful building again. I will always use my chance to go there.”

Usupashvili told him that no one has prohibited him from going to parliament, and that he will be invited back to hold another state of the nation address there when the constitutional debate is over.

“I think your members would be way more satisfied by a speech in parliament than what happened on Friday,” the president said.

Davit Bakradze, who represents the parliamentary minority today also remarked it was a productive meeting and that the parties will continue to meet. The next meeting will be held in the nearest days.

“We do not debate so much behind closed doors, but when we see journalists, its different,” the president said.

Usupashvili responded that the president is host today and last words are his, but when there will be a meeting at parliament, he will speak more.