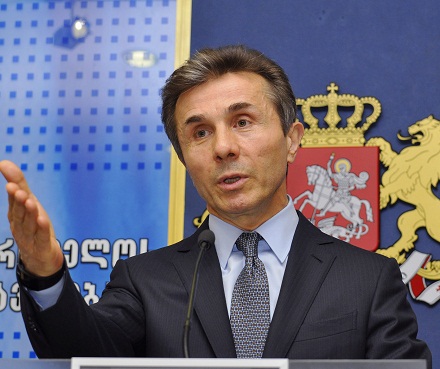 Summing up today’s conversation with Saakashvili, he opened with asking the journalists:

“You have met with the president, did you understand what we achieved?”

The prime minister went on to say that today’s meeting didn’t bring the so-called cohabitation process forward, but that he is ready to continue the dialogue in the future.

President Saakashvili in his comments earlier, drew attention to three main democracy challenges Georgia in his opinion is facing. Ivanishvili pointed out that these challenges have existed for a long time while Saakashvili held government power.

What the president said today is a distortion of reality, he said, because the democracy deficit existed while he himself had power.

Addressing the issue about freeing media from all forms of pressure, he said pressure against the media is not an unprecedented thing in Georgia. And the other two issues – independent courts and harassing people for their political views – are problems which existed during Saakashvili’s time in government, he said.

Ivanshvili then went on to criticize the president for using rhetoric well-suited to be received by diplomats and government heads in Europe and the United States, but which is disconnected from the reality that Georgians are living in. He called on Saakashvili and his party to stop speaking only with Europe and the US, and begin speaking so it is understandable to people.

“They shouldn’t remain in that virtual world, in which they have been for the last nine years.”

As for the constitution changes, which should have been the main topic of the meeting, the PM once again asked Saakashvili to declare his position on this issue, which he asked him to do last week in an open letter.

“Saakashvili couldn’t remember any countries where the president can personally dismiss the government, and form one, and he promised me that he will publish a letter where he will name such examples,’ the PM said.

He still thinks the constitutional amendments will be passed in parliament, but he also doesn’t think it will be a problem if it isn’t passed.

Later on Monday, the prime minister published a letter in which he writes that “the irresponsible statements and actions” of the president contradicts the policy of the Georgian government and this creates additional problems for the country’s reputation.

“I would like to state that the president of Georgia assumes full personal responsibility for his actions until the completion of his presidential term in October 2013,” the letter reads, adding that Saakashvili’s trips abroad will not be coordinated with the Foreign Affairs Ministry and his statements will not represent the position of the government, unless confirmed by government officials.