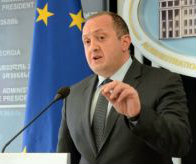 TBILISI, DFWatch–President Giorgi Margvelashvili rules out the possibility of a change in Georgia’s foreign policy orientation.

The government coalition is split with both sides accusing the other of endangering the policy of seeking integration with NATO and the European Union.

But Margvelashvili suggested that the Georgian people’s course toward Europe is not up to politicians living today to change, but is a choice made by ‘our forefathers’.

“But at the same time, it is perfectly possible to ask the question of how effectively each politician is implementing our people’s will, and that question should be given adequate answers,” he said.

The comment, made shortly after arrival from Austria Wednesday night, came amidst the worst crisis in the Georgian Dream government’s two years. The coalition has lost three ministers, many other officials, and one party has broken ranks, jeopardizing its majority in parliament.

He suggested that the government should meet to discuss how to effectively implement the agreement Georgia recently signed with the EU and the ‘package’ offered by NATO, and said he will attend such a session together with the secretary of the National Security Council, which is subordinate to him.

The president also asked parliament to schedule a time for him to address the people.