Preliminary results: Patriot Alliance gets into parliament with 17 votes margin

Preliminary results: Patriot Alliance gets into parliament with 17 votes margin 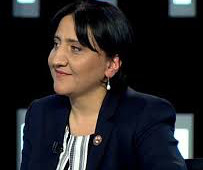 Irma Inashvili, one of the leaders of Patriot Alliance.

TBILISI, DFWatch–Three parties are predicted to surpass the 5% percent threshold and make it into parliament, after 82.55% percent of votes have been counted, the Central Election Commission (CEC) said.

As the results currently stand, Georgian Dream looks to get 49.26 percent, National Movement 26.46 percent and Alliance of Patriots at exactly 5.00 percent – only 17 votes above the minimum threshold for getting into parliament.

The total number of votes counted so far is currently 1447885, which means that in order to surpass the five percent threshold, 72395 votes are needed. Patriot Alliance has 72412, according to the regularly updated CEC results webpage.

Those are the results of proportionate system, but as for the majoritarian, a second round will be held in number of regions.

Georgian Dream currently seems set to win 31.5 percent of votes in the majoritarian system. There are no other parties whose candidates are winning the first round.

Majoritarian candidates have to surpass a 50 percent barrier to win.

In most of the majoritarian districts, GD will compete against UNM, but among the competing candidates there are also independent candidates: Salome Zourabichvili and Tsezar Chocheli, the leader of Free Democrats Irakli Alasania, Simon Nozadze of the Industrials’ Party and a few others who will compete in the second round against GD and UNM.

By the final information of CEC 51.6 percent of the voters vote in election.