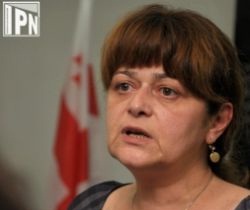 Maia Miminoshvili says her dismissal as head of the National Examinations Center may be a consequence of her son participating in yesterday's opposition rally in Tbilisi. (IPN.)

TBILISI, DFWatch – An employee of the Ministry of Education has been fired and says it might have been because of her son’s political activism.

Maya Miminoshvili, who was head of the National Examinations Center says that her son yesterday participated in a rally organized by Georgian Dream, the main opposition movement.

But the ministry released a statement today saying that the reason for her dismissal was differences regarding how to implement reforms.

“Unfortunately during the implementation of reforms, differences appeared between the ministry’s police and Maya Miminoshvili’s position.”

170 employees at Miminoshvili’s place of work have signed a petition expressing their full trust in her, and threatening to resign if the minister doesn’t cancel her firing. Apparently, some have even handed in their resignation.

Miminoshvili says this was the personal decision of Education Minister Dimitry Shashkin.

“But this wasn’t only Miminoshvili’s position, but the whole organization which I was working in. There are other people there too,” she told journalists today.

She says her son told over the phone yesterday that he was participating in a demonstration organized by Georgian Dream with his wife.

“My son is an adult, living separately, and if his decision and views are the reason for my being fired, then this is a catastrophe.”

Miminoshvili said they didn’t even know whether she had son or daughter.

“It’s interesting how they recognized my son among so many people. The only source to this information was our phone call.”

But she says this is not the official reason for her being fired. The minister called her and the conversation lasted only 2-3 minutes, saying that he had decided to fire her.

“When I got back to the center this statement was already reported.”

She says she has no political sympathies, and there have been differences between her and the minister’s views before, but it never affected the final decisions.

Since Bidzina Ivanishvili set up a public movement and political coalition, there have been reported mass-firings of teachers and other people working for state bodies. Most of them say the reason was the political activism of someone in their family. Most of the reports are from parts of the country outside of Tbilisi.

Employees of the National Examinations Center today released a statement appealing to President Mikheil Saakashvili. The appeal says that the center always works according to objective, transparent and fair principles.

“We assure you that the position of Maya Miminoshvili is absolutely compable with employees of the center, which means that the decision made towards chair of the center applies to all employees and activity of the center.”

They consider that any controversy should be solved through negotiations, discussions and not rigid decisions.

“Mr President, we state that the decision made by Mr Dimitry Shahkin jeopardizes the conduction of national exams, as well as teachers’ certification and master’s exams. So we ask you to personally make a decision which will avoid such a danger and protect society from distrust and nihilism.”

Zaza Miminoshvili, brother of Maya Miminoshvili who sings in the famous Georgian band Shini said that he might have been the reason for her sister being fired.

A few days ago he said on Maestro TV that on May 26, he called spokes person for Georgian Dream and congratulated her with the Independence Day of Georgia and expressed support for the demonstration planned for May 27 and also that he couldn’t come to the rally.

“It’s a fact that we’ve built a country in which it’s not possible for a brother and sister to have different positions. I’m very concerned. We should have a different state. It’s not possible to live like this.”

Meanwhile employees of the center met with the Minister of Education, but they are dissatisfied with the meeting. They say they will release a statement tomorrowabout the case.