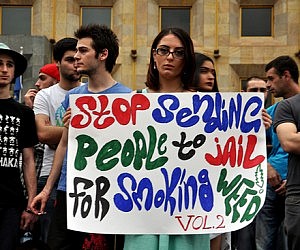 June 2 has become the rallying day for supporters of legalization. (DF Watch.)

TBILISI, DFWatch–Possession of up to 70 grams of marijuana is no longer a crime in Georgia, following a ruling in the Constitutional Court.

The Court on Saturday struck down as unconstitutional a passage in the law that made it punishable by from 7 to 14 years in jail for buying and possessing small amounts of marijuana.

The case was filed by Beka Tsikarishvili against the parliament. Tsikarishvili, a young man working at a local non-governmental organization, was detained in 2014 for using marijuana. Groups of young people campaigned in his support and demanded to decriminalize marijuana and soften the government’s policy toward soft drugs.

June 2 has become a rallying day for the cause. Hundreds of people, mostly youth, gathered outside the government office to voice their demands. They argue that the legislation punishes drug dealers and soft drugs users in the same way.

With the assistance of the Education and Monitoring Center (EMC), Tsikarishvili sued against parliament in Constitutional Court.

EMC later explained that the Constitutional Court ruling only applies to purchasing and keeping marijuana, not using it, because it wasn’t part of the lawsuit. The ruling also doesn’t concern dealing of soft drugs or cases when the amount of stored marijuana is reasonably large and indicates that it is meant for dealing.

The limit of the amount of marijuana allowed to keep is 70 grams.