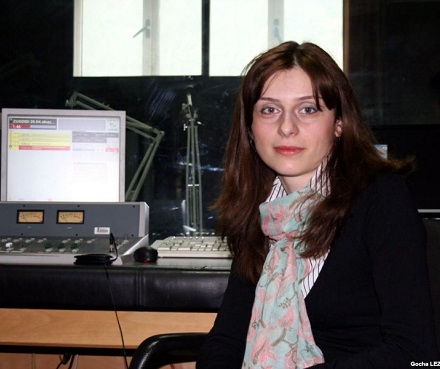 Teona Akubardia, chair of GDRI's council, says she went to the bank and discovered that she couldn't carry out any transactions. (IPN.)

TBILISI, DFWatch – By decision of Tbilisi City Court the bank accounts of Georgian Development Research Institutes (GDRI) were seized. The leadership of the organization doesn’t know the reason, but suspect that it is because of a donation from Bidzina Ivanishvili.

GDRI is an independent nonprofit organization which was founded in 2011 by the Georgian experts Vakhtang Khmaladze, Gia Khukhashvili and Zaza Shatirishvili.

It is perhaps best known for a poll it organized in the fall of 2011, which showed a much higher support for Bidzina Ivanishvili than another poll conducted by Gallup for the International Republican Institute.

Polls in Georgia have been  varying wildly, and pollsters are being discredited by either side.

GDRI does not only organize polls, but has a more broad goal of improving knowledge about politics in Georgia. To this end, the organization carries out research and publishes reports about Georgia’s internal and foreign policy problems.

The bank accounts of GDRI were seized. The organization hasn’t been informed by authorities and learned about what had happened by pure coincidence.

Teona Akubardia, chair of the institute’s council, says that she went to the bank to do something, but found that she was unable to carry out the financial transaction.

“I tried to find out the reason. The bank responded with a letter and told me that the account had been seized by decision of a court. Afterwards, I appealed to the court too, but received a completely unclear answer. I have no idea why the court made such a decision.”

Akubardia said today at a press conference at the GDRI office that it is unknown whether the reason may have been a donation the organization received from Bidzina Ivanishvili.

She said the businessman transferred an amount of money to the organization’s account.

Now, the organization plans to go to legal steps to try to solve the problem with the seized accounts, but Akubradia says they do not have a right to appeal the decision by Tbilisi City Court, for the same reason as Kaladze and Natsvlishvili’s cases. https://dfwatch.net/bank-account-frozen-because-of-opposition-sympathies-32439

“Accordingly, the issue to revoke the seizure in Progress Bank account is unclear, which in fact causes paralysis of the institute’s activity.”