Politician who was beaten in 2005 holds Saakashvili responsible

Politician who was beaten in 2005 holds Saakashvili responsible 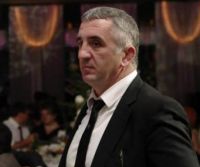 Republican Valeri Gelashvili is convinced his beating in 2005 was ordered by Saakashvili. (Interpressnews.)

TBILISI, DFWatch–Georgia’s Prosecutor’s Office has opened an investigation against former Interior Ministry officials Erekle Kodua and Gia Siradze for the beating of MP Valeri Gelashvili in 2005.

The Prosecutor’s Office made a statement about this issue on Thursday. Valeri Gelashvili himself talked about this investigation on a Georgian TV channel a few days ago, and in the interview he accused Kodua.

Gelashvili is now a member of the governing Georgian Dream coalition in parliament. He is a majoritarian elected from his hometown Khashuri.

In 2005, when he was beaten by unknown people, he was an MP representing Republican Party, one of the parties that supported then President Mikheil Saakashvili after the Rose Revolution.

That party won the parliamentary election alongside Saakashvili’s National Movement in 2004, but in June 2005 they made a statement that they no longer supported the government.

After the Republican Party went into opposition, Gelashvili spoke with the daily newspaper Rezonansi and said that Saakashvili had deprived his house, which used to be in the location where the president’s residence stands today and he did it without paying any compensation. In addition, he also spoke about the private life of Saakashvili in a quite uncensored way. He was one of the first people to say that in the government, Saakashvili used to make decisions on his own based on his personal goals.

After this interview was published, Gelashvili was beaten in the street by people wearing black masks. He was severely injured and according to doctors barely survived. According to a medical report he had brain trauma, several broken bones, injuries to the nose and forehead and other injuries.

At the time, many thought that he was beaten for giving this interview but the case hadn’t been investigated until now, but when the new government came into power in 2012, they promised to start investigating. In the last few days there was an expectation that the Prosecutor’s Office would name specific names involved in the case.

On Thursday, representatives from the Prosecutor’s Office said at a briefing that the office charges Erekle Kodua, former head of the Interior Ministry’s Special Operative Department and Gia Siradze from the same department for beating Valeri Gelashvili and illegally obtaining a weapon, officially registered in Gelashvili’s name. None of the accused are in Georgia.

According to the statement by the Prosecutor’s Office, the investigation has established that Gelashvili was beaten for giving an interview to the newspaper Rezonansi on June 29, 2005, in which he spoke about former President Mikheil Saakashvili’s private life and details about the construction of the president’s residence.

The office claims that Kodua planned to beat Gelashvili using a special unit subordinate to his department and he instructed Giorgi Siradze, head of one of the divisions in the Special Operative Department, to be leader of the special group assigned to the job.

“On July 14, 2005, according to the advanced defined plan, fighters of the Special Operative Department blocked the [road for the] car driven by Valeri Gelashvili, driving on the left embankment of the river Mtkvari and went on to attack Valeri Gelashvili,” the office’s statement reads.

“As ordered by Erekle Kodua and guided by Gia Siradze, fighters of the Special Operative Department, by force took Valeri Gelashvili and accompanied persons out of the vehicle and immediately started to beat him severely, using butts, and as well beat member of his security team, Malkhaz Tskhakaia.”

They illegally misappropriated Valeri Gelashvili’s “Heckler Koch” firearm which was in his legal possession.

If convicted, Kodua and Siradze may be sentenced to from ten to fourteen years in jail. The investigation is not finished.

Speaker of Parliament Davit Usupashvili, who is leader of the Republican Party, said Thursday’s statement by the Prosecutor’s Office wasn’t unexpected.

“No-one suspected that Valeri Gelashvili was beaten by aliens. We didn’t know the surnames and names of those who carried out the operation. Nine years later the case is opened. I am sure that it will have a continuation,” Usupashvili said.

After it was announced Thursday that an investigation has been opened, Gelashvili told journalists that he doesn’t have any complaints against anyone except Mikheil Saakashvili.

“Kodua must cooperate with the investigation because his superior official ordered him to beat me,” Gelashvili said, adding that his beating was ‘planned at the office of Saakashvili.’

He said former Defense Minister Irakli Okruashvili has given testimony in the same case. Okruashvili went against Saakashvili from 2006. He was summoned to the Prosecutor’s Office about a month ago, but didn’t say what he was there to talk to them about.

He said there is no evidence that Kodua gave orders to beat Gelashvili or anything like that. Okruashvili’s testimony is also part of the case, but according to the lawyer, Okruashvili’s two statements are contradictory, as in one of them he says that Saakashvili gave him a certain order and Vano Merabishvili former Interior Minister attended this, but in another statement he says that he and Saakashvili were alone.