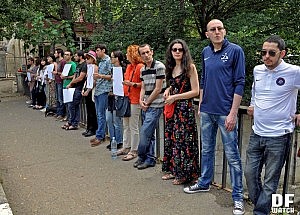 TBILISI, DFWatch–In Georgia, the Interior Ministry is accused of psychological and physical pressure against a young man who committed suicide after being interrogated by police.

Mamuka Mikautadze, 36, is reported to have killed himself at a water reservoir in one of Tbilisi’s suburbs, where he was found dead. Family members claim he was detained by the police the previous day and for few hours was questioned at the main police department in Tbilisi.

Before committing suicide he called family members to say that he was forced to give testimony against his friend after being tortured.

Family members also suspect that he might have been killed. Zizi Ezgveradze, wife of Mamuka Miqautadze, claims his husband was beaten.

“He said that everything hurt, but didn’t show his body to anyone,” she said, adding that her husband had bruises in the neck, feet, nose and head.

Edzgveradze says her husband was worried about giving false testimony by force and that an innocent person might be detained because of his testimony.

Kakha Kozhoridze, chairman of Georgian Young Lawyer’s Association (GYLA), said he assumes that the version of Mikautadze’s death told by his family is ‘most likely’ true. He said he saw testimony given by Mikautadze where he writes that he was harassed and that this was why he committed suicide.

GYLA demanded an autopsy of the corpse in order to find out whether the police had physically abused him during questioning.

After the autopsy it was revealed that Mikautadze had bodily injuries, but a detailed forensic analysis will be published later this week.

Kozhoridze considers this case one of the most alarming cases in recent time.

The previous government was often accused of using such methods to detain and question people. There were a number of examples when people unexpectedly died during questioning at the police. One of the most controversial cases is the death of Solomon Kimeridze.

Saakashvili’s government rejected the accusations and claimed that it had political reasons; however since the prison abuse scandal of September 2012, the picture changed. Then Ivanishvili’s government came to power promising that they won’t let such incidents to take place and law enforcers wouldn’t violate the law.

That’s why the death of Mikautadze has resonated to such a degree. On Sunday there was a protest rally at the main police department in Tbilisi. About 30 people came to demand that the Interior Ministry objectively investigates the case.

GYLA claims that no-one has been questioned regarding this case, despite there being ‘obvious signs of a crime’.

Interior Ministry representatives do not yet comment on this issue.