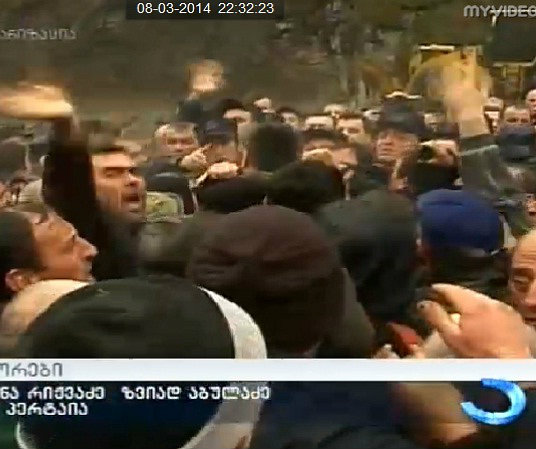 TBILISI, DFWatch–Police in Georgia Saturday broke up a protest in a village where a Norwegian company wants to build a hydro power plant.

About two hundred policemen were mobilized to break through a road block put up by villagers in Ghurta, in the south western Adjara region of Georgia.

They were joined by people from neighboring villages – Didachara, Paksadzes, Diakonidzes and Geladzes. Local Otar Iakobidze told Maestro TV that there were seven hundred people taking part in the road block, pitted against two hundred police.

Iakobidze said they have videos of policemen manhandling women during the confrontation – on the International Women’s Day, March 8.

The several hundred million dollar project is organized and partly financed by Norwegian company Clean Energy Invest and aimed at producing electricity for export to Turkey.

Villagers in Ghurta have vowed to not let the project go ahead and further increase the risk of landslides. They recently buried 22 of their own who died in the most recent such incident.

Iakobidze said they want a real environmental impact assessment so the consequences of the project can be better understood. They fear that the construction of a tunnel and a reservoir below their village will exacerbate the already alarming risk of landslides.

Deputy Energy Minister Ilia Eloshvili in an interview on Maestro TV claimed the impact assessment is sufficient and that all required procedures have been followed. He threatened villagers with ending all dialogue if they continued blocking the road for construction workers.