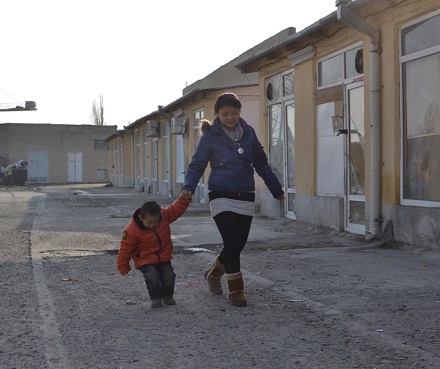 The company Lilo City Ltd confirms that Chinese citizens use the small shacks as living quarters, but says there is nothing wrong with that.

TBILISI, DFWatch – People at a Chinese settlement south of Tbilisi say the police came and questioned them two days after DFWatch wrote about the place. The Interior Ministry denies that the police was there.

DFWatch December 6, 2011, reported on a Chinese market where women and children seemed to be living under cramped conditions in the highest secrecy. A spokesman for a company called Lilo City Ltd, which owns the area, says the police arrived two days later. They came in six cars and questioned the management for five to six hours, says the spokesman, who only wants to say his first name: Zviad.

The police also looked around the market, where there are more than a hundred booths of about three by three meter’s size, many of them locked from the outside with a padlock. Some are used as living quarters.

When first reporting about this market, DFWatch was approached by Zviad, and we asked him whether people were living there, but all our questions were rejected. After fifteen minutes we were physically thrown out by his security guards. There were clear indications that people were living inside some of the shacks, and the great secrecy combined with women and children apparently living there was the background for the article’s headline “Human trafficking in Tbilisi?” 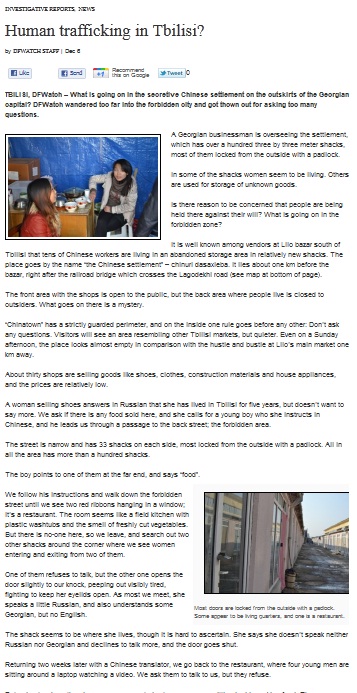 Facsimile of the original report December 6, which seems to have lead to police action two days later, although the Interior Ministry denies this.

Zviad says the use of the word ‘trafficking’ was unfortunate, because the police repeatedly asked them about trafficking, and apparently must have read the article. He and the two men who accompany him at the entrance to their office building next door to the market, all express dismay at what happened, but except from the use of the word ‘trafficking’ they have no objections to being the subject of reporting.

They all deny that there is anything like trafficking going on in their market. Both Zviad and the head of the area’s security say they have formerly worked in the Interior Ministry, and they insist that they know very well what trafficking is, and that it doesn’t looks anything like the place they are running here at Lilo.

-Why did you say last time that you don’t work here? we ask Zviad, who says he is a kind of caretaker for the area, but not manager.

But he does not answer our question. Instead he explains that Lilo City is a wholesale market operated by Chinese traders who arrive from China bringing with them textiles, accessories and other goods to sell here in Georgia.

The reason the traders live in shacks here is that this is so far from Tbilisi city center that for practical reasons, they often decide to sleep in their booths instead of going back to their apartments.

Zviad says the Chinese traders finish work at around 7 pm and then meet the other distributors and the working day ends very late, especially in winter. But he wants to make it clear that the people who sometimes stay overnight in the shacks are also renting apartments in Avlabari, Vazisubani, Isani and other districts of Tbilisi, so it’s their choice whether to stay at night here or go home.

When a Chinese citizen arrives in Georgia planning to run a small business in the country for two, three or more years, he or she brings a passport with visa to the Ministry of Justice and receives a temporary ID card.

On our last visit, December 6, DFWatch was accompanied by a Georgian with a Master’s degree in Chinese language and several years of university studies in China. She found it unusual for Chinese to be so reclusive. Later she called around Tbilisi’s Chinese community, and found that the settlement at Lilo is unknown among them. There are two thousand Chinese in Georgia.

But Zviad says the reason the Lilo Chinese are reclusive is that there is still a Communist party in China and they have the communist mentality and where the communists are there is no freedom.

-They just don’t want to communicate with journalists, Zviad explains.

-These are people with a specific merchant world view and their aim is to make money. They don’t like communicating with strangers, he says, and suggests coming in summer to see their typical day as they are playing domino, chess, and cards and having fun in the evening. He says the Chinese sometimes hire translators to communicate with customers.

Shota Utiashvili, spokesman for Georgia’s Interior Ministry, rejects the idea that the police have visited Lilo City and questioned people.

-That wasn’t us. You should contact the Ministry of Finance or the Revenue Service, he says.

The Ministry of Finance directs us to the Revenue Service, which does not answer our inquiries.