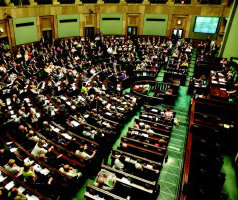 TBILISI, DFWatch–Poland ratified the association agreement between Georgia and the EU on Friday; the 13th EU member state to do so.

The vote in the Sejm was 439 for ratification, none against and one abstaining.

The agreement gives Georgia free trade access to Europe’s internal market in return for adjusting its domestic legislation in line with EU directives in a number of areas.

It was signed in Brussels on June 27, 2014, along with similar EU agreements with Ukraine and Moldova.

Parts of the agreement is already in force, but for it to take full effect, all 28 EU member states plus the EU itself as well as Georgia must ratify it.