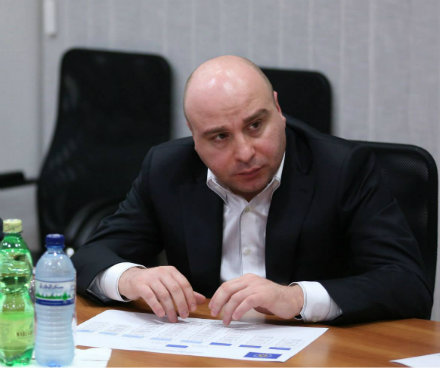 TBILISI, DFWatch–A relative of the Georgian prime minister has been appointed as executive secretary of the Georgian Dream Party, the largest member of the government coalition by the same name.

It was a unanimous decision by the political council of the Georgian Dream late Monday evening to appoint Zviad Jankarashvili, cousin of the wife of Prime Minister Irakli Garibashvili.

The GD political council consists of the top leaders of the party, headed by Garibashvili, and is the top body responsible for the party’s strategic decisions.

Recently, the council decided to strip Murman Dumbadze, MP from Adjara and vice speaker of parliament, of his party membership.

The GD party was established by Bidzina Ivanishvili in 2011 and is the largest member of the ruling Georgian Dream coalition.

Irakli Garibashvili is the party leader, and Kakhi Kaladze, a former AC Milan left back and now Minister of Energy, is secretary general.

During Garibashvili’s tenure as a minister of interior, Jankarashvili was in the MIA too, in the position as chief of the general inspection, which investigates conduct of and crimes  committed by the police. He resigned in April, several weeks after Irakli Garibashvili was appointed as PM.

Zviad Janqarashvili is cousin of Irakli Garibashvili’s wife and nephew of Tamaz Tamazashvili, a relation that is regarded as close kin in Georgian culture.

Tamaz Tamazashvili is a high ranking police officer with title major-general, and is Garibashvili’s father -in-law and, GD’s political opponents argue, has significant influence over decision-making, although he doesn’t hold any significant position inside the ruling party. He used to be chief of Kakheti regional police during Shevardnadze, in the late 1990s and early 2000s.

The National Movement claims the appointment of Jankarashvili means a further strengthening of Tamazashvili’s influence over Georgian politics.

Tamazashvili was arrested in October 11, 2011, soon after Bidzina Ivanishvili made his first statement about his political plans, for allegedly possessing illegal firearms. Georgian Dream has regarded it as a political arrest and after its victory in the parliamentary elections in 2012, Tamazashvili was immediately released from prison.

The National Movement, the former ruling party of former President Mikheil Saakashvili, has argued many times that Tamazashvili wields significant power over Georgian Dream, through his son-in-law, the PM.