PM Kvirikashvili: Peace roadmap for Abkhazia and South Ossetia in the works

PM Kvirikashvili: Peace roadmap for Abkhazia and South Ossetia in the works 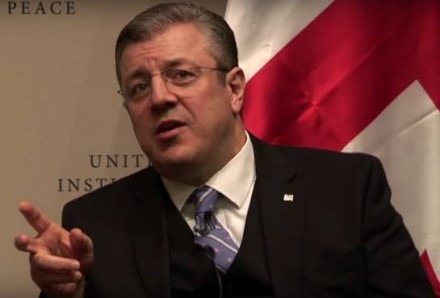 PM: ‘Peace roadmap’ in the works for Abkhazia and South Ossetia (Still from Youtube)

TBILISI, DFWatch–Giorgi Kvirikashvili announced the need for ‘decisive and brave’ steps in relations with Abkhazia and South Ossetia and revealed that Georgia was working on a peace plan, which is to be consulted with Georgian public opinion and the de facto republics.

On 26 April, Prime Minister Giorgi Kvirikashvili delivered a speech at the U.S. Institute of Peace (USIP) in Washington, D.C. and answered questions regarding Georgia’s foreign and domestic policy.

The meeting at USIP was a part of Mr Kvirikashvili’s four-day working visit in the United States, during which he met with representatives of the World Bank and the International Monetary Fund, American senators, the Atlantic Council, and press.

During his speech, Mr Kvirikashvili made comments about the situation in Georgia’s breakaway territories.

Abkhazia and South Ossetia are considered by Georgia integral parts of its territory, despite the fact that they have remained outside the Georgian control since the early 1990s and claimed a de facto independence, which was recognised only by Russia and three other UN member states.

Mr Kvirikashvili stressed the Georgian commitment to building friendly relations with Abkhazians and South Ossetians by means of providing free healthcare and education, despite the “fragile” and constantly “deteriorating” humanitarian situation in the republics.

‘The situation in the occupied regions remains very fragile. Humanitarian situation is deteriorating every day. Two days ago a seventeen-year-old boy was captured by South Ossetian militia and is kept in prison just for crossing this so-called “border”, “occupation line”, or “administrative boundary line” — we can put it either way. He was just chasing his cows, he was an ordinary shepherd. It happens almost every day and every week. We have Georgian-language education banned in Abkhazia, Gali district, which is a violation of fundamental rights of Georgian nationals living across the administrative boundary line. Despite that, our commitment to rebuild peaceful and friendly relations with our Abkhazian and South Ossetians friends and citizens remains absolutely fundamental in our future policy considerations. For this we’re building our relations, we are proposing numerous social projects: free healthcare and free education for our South Ossetian and Abkhazian friends. We definitely see the ice melting. To sustain this path, we need international support, especially from our strongest international partner, United States’, Mr Kvirikashvili said.

During the Q&A session, Mr Kvirikashvili was asked what sort of assistance Georgia expected from the United States in terms of conflict reconciliation. The question was sent in by Dr Susan Allen from George Mason University which has been involved in convening Georgian–South Ossetian discussions.

Mr Kvirikashvili stressed that building a ‘peaceful and attractive’ Georgia is the most productive way towards reconciliation and that Georgia needed to achieve American political and economic assistance in order to achieve it.

‘First of all, the US is already doing a lot through participation in Geneva international discussions at a very high level, which is very important for leading successful talks. I can say that several recent rounds, we’re more or less successful; at least, it did not end up with walkout of the participants of these discussions. We have some progress through re-establishing conflict and problem prevention mechanisms in Gali district of Abkhazia. I can only say that there are different ways to help Georgia to rebuild these relations. And again, building peaceful Georgia, attractive Georgia for our Abkhazian and Ossetian citizens is the most important and the most productive way to reconcile these conflicts. I think that US is helping Georgia a lot to improve the country, to improve the leaving conditions of Georgian citizens, to make Georgia more attractive for Abkhazians and South Ossetians’, Mr Kvirikashvili said.

Prime Minister later admitted that Georgia was unable to pursue ‘more decisive’ policy steps regarding the breakaway regions during its period of independence, because of how sensitive the issue was for Georgian society. He stressed the need to admit mistakes on both sides.

He also declared that the Georgian government was working on a ‘peace roadmap’, which will be first discussed with Georgian public opinion, and then with representatives of the de facto states.

‘It cannot happen automatically, because during these years the trust was lost. We need to admit mistakes from both sides. Unfortunately, we went too far. We could have taken more decisive steps during these twenty-five years. Unfortunately, this did not happen, because this was a very sensitive issue internally for Georgia and there was no progress during these twenty-five years. Now we need to — and we are drafting a peace roadmap for which we need, first of all, to consolidate the opinion internally in the society, among Georgians, and after this, to put this roadmap forward for discussion with our Abkhazian and South Ossetian citizens. I am cautiously optimistic that we can reach progress’, Mr Kvirikashvili stated.

Prime Minister also noted that people-to-people contacts between Georgians and Abkhazians have been on the rise.

‘We can observe Abkhazians crossing the ABL to attend, in Tbilisi, football finals last year. We observed so-called “McDonald’s diplomacy” several kilometres from the ABL, where we have Abkhazian representatives of the young generation coming and talking at the patio with their Georgian peers. This is not enough, of course. We need to make decisive, brave steps in order to improve the people-to-people chemistry. We are determined to compare [put forward] a very attractive roadmap for our citizens in Abkhazia and South Ossetia’, Mr Kvirikashvili said.

The participation of residents of Abkhazia during the UEFA Super Cup in Tbilisi in August 2015 provoked heated discussions within Abkhazian society about moral objections regarding travelling to Georgia for personal purposes such as entertainment, trade, or medical treatment.

There are no media reports about the alleged visit of Abkhazian youths at Georgian McDonald’s and their alleged interaction with their Georgian peers.

In February 2016, Said Barganjia, the young journalist of Sputnik Abkhazia, wrote a subjective report in which he described his trip to the Georgian-controlled part of the Enguri (Egry in Abkhaz) Dam and a dinner at a traditional Georgian restaurant in Zugdidi. In his report, Mr Barganjia favourably compared Zugdidi to Krasnodar, the major city of southwest Russia, and expressed admiration over the fact that there was a McDonald’s restaurant in the city.