PIK journalists out of a job

PIK journalists out of a job 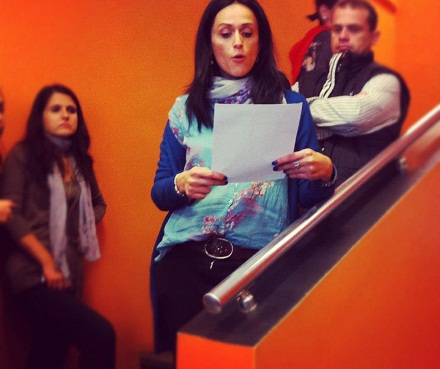 Journalists at PIK finally got an explanation from the public broadcaster: They have been closed down. (Photo posted online by the journalists.)

TBILISI, DFWatch — Georgia’s Public Broadcaster has abolished its contract with the Russian language TV station PIK, which has been off the air since October 19.

PIK, or First Informational Caucasian, was a channel belonging to Georgia’s Public Broadcaster. It is the only Tbilisi-based TV station using the Russian language and aimed at viewers in all the former Soviet Union.

About 400 employees are now left without jobs, after GPB Saturday released a statement that it had ended a working contract with PIK.

October 15 journalists of the channel protested against not having been paid salaries and the uncertainty surrounding what will happen to the channel by staying silent through their live evening news program. Journalists also demanded an explanation from GPB as to why the channel had been taken off satellite transmission.

GPB’s statement says that there was incorrect information reported regarding PIK and that’s why GPB hasn’t made any comments regarding the issue before now.

The statement refers to a contract signed with PIK in January, 2012, according to which Public Broadcaster has the right and authority to transmit the signal of the channel via satellite.

When PIK’s signal was taken off satellite, the channel’s representatives managed to broadcast it by using their own satellite dish, but GPB says this was a violation of their agreement. The public broadcaster also claims it was a violation to use the news program to stage a protest, because the content of GPB channels is the property of the Public Broadcaster.

“It is categorically unacceptable that employees used this content for internal disputes to express [their] own protest and it is also violation of agreement conditions.”

According to GPB’s statement they informed PIK about the violations and warned them that further violations might put the contract in danger. In response they received a letter from the director of PIK taking responsibility to inform the company’s owners.

October 18, the director of PIK asked GPB to annul the current agreement between them and start new negotiations.

“GPB responded to this request and abolished working contacts with PIK until further relations are clear.”

Regarding the suspension of the satellite signal, GPB explains that October 12 they stopped their contract with Globsat, which transmitted PIK’s signal, and continued broadcasting through Turkstat instead.

After signal suspension PIK sent its own signal again on Globsat, which might cause undefined expenses for GPB, which had canceled the contract with this company.