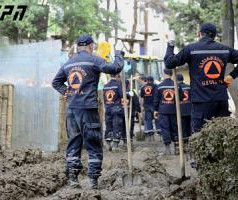 TBILISI, DFWatch–As a penguin was discovered alive Tuesday, Tbilisi Zoo for the first time published the complete list of animals they had before the flood on the night of June 13-14.

The penguin was found by soldiers as they were cleaning the lower section of the zoo, which was completely covered in mud and uprooted trees in the disaster.

After being checked by veterinarians, the bird was reunited with the nine others that have been rescued, out of a total of 17.

The discovery came the same day as the zoo for the first time published the full list of the animals that were living in the zoo before the flood. Last week, a man was killed by an escaped tiger amid confusion over exactly how many animals were unaccounted for.

Spokesperson for Tbilisi Zoo Mzia Sharashidze told DFWatch that the reason the complete list hasn’t been published until now is that the administration building of the zoo was flooded, which prevented them from accessing the database. It took days reaching the building, then putting the office infrastructure in order, and restoring the computers, which were all wet.

The list shows that there were 14 lions, three of which died, six were killed, and five survived. There were seven tigers, six were killed, one is missing. Only two bears survived out of 13. Out of four hyenas, one died, two were killed and one is still missing.

A white tiger, which ran away on the night of the disaster, hid in an old warehouse for a few days, then attacked and killed a man working there. The tiger was then shot by marksmen, who were unable to tranquilize the animal. Three jaguars died. Also four wolves died, seven were killed and only two of them survived. All four foxes died.

A missing tiger and hyena are still being looked for.