Party finance rules may be used against anybody, say activists

Party finance rules may be used against anybody, say activists

The biggest problem with the law is that it’s vague and therefore has the potential of being misused and applied arbitrarily or against certain political forces, say the groups. They want party finance rules enforced in December reined in. (Photo: Mari Nikuradze.)

TBILISI, DFWatch – Outspoken activists and rights groups met in Tbilisi today and signed a petition called ‘It affects you too’, demanding that something is done to rein in Georgia’s new rules about party financing which they see as a threat to basic rights.

The rules are laid down in the law about political unions of citizens. At the end of 2011, parliament adopted a bill with amendments which caused an uproar among local and international experts and organizations.

The new law sets a number of restrictions for political party financing, but applies the same rules also to all legal and individual persons who ‘are directly or somehow related to a political party’.

Experts and groups say this makes it in fact impossible for independent groups to receive financing from donors. It even means that receiving a present might be considered a bribe.

Local media and representatives of non-governmental organizations (NGOs) started a campaign to demand amendments to the new law. A new bill with this in mind has been prepared by the groups and will be initiated in parliament tomorrow.

The name of the campaign and the main slogan for the organizers and activities is ‘It affects you too’.

“The danger affects everyone and so this slogan, which is the name of the campaign ‘It affects you too’ is a very real slogan. It may be enforced. The whole legislation can be enforced against representatives of the media, as well as against some media organization and also against other organization or individual person,” Ia Antadze, journalist at Radio Liberty Georgia, tells DF Watch. 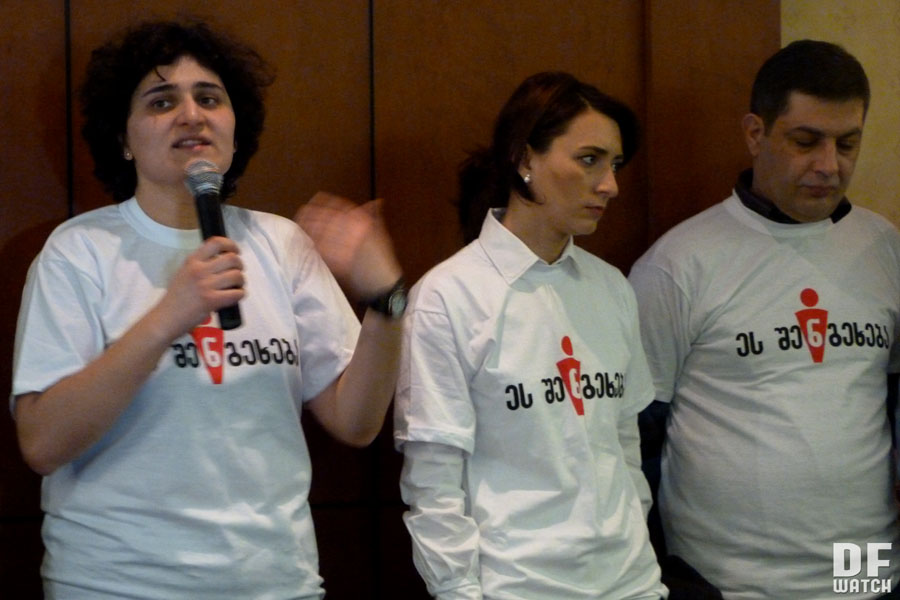 The new rules apply to each citizen and restricts the freedom of speech and political freedom of each of them, says Shorena Shaverdashvili (left), editor of Liberali Magazine. The T-shirt she is wearing bears the slogan "It affects you too"; the name of the campaign. (Photo: Mari Nikuradze.)

The groups behind this initiative had invited foreign diplomats today to explain to them how the new rules threaten basic rights. The organizations include Georgian Young Lawyers Association (GYLA), International Society for Fair Elections and Democracy (ISFED) and Transparency International (TI) Georgia.

They explained the problem by way of several examples, to make it clear what dangers the law entails.

Or maybe a family member of some person lives abroad and is a foreign citizen.

“The Chamber of Control considered that you are connected to some political party or politically active person, you won’t be allowed to receive material help from your family member, who is a foreign citizen.”

Remittances, money sent back home from relatives abroad, constitutes a significant part of the economy in Georgia; around six per cent of gross domestic product.

The new law granted ‘undefined and non-constitutional authority’ to the Georgian Chamber of Control.

According to the Georgian Constitution, the Chamber of Control is only obliged to make the budget resource audit, but the new law now obliged the Chamber to control legal and individual persons’ income and expenses.

The biggest problem with the law is that it’s vague and therefore has the potential of being misused and applied arbitrarily or against certain political forces.

“We don’t know how it is really applying, who is affected by it and that means everybody could be affected,” Mathias Huter, Senior Analyst and Program Manager at TI Georgia tell DF Watch.

The aim of the campaign is to change the law adopted in December and which is directly related to the election environment, Shorena Shaverdashvili, editor of Liberali Magazine says.

“It restricts and puts into unequal conditions not only political players, specific media organizations, NGOs, Banks, but it applies to each citizen and restricts the freedom of speech and political freedom of each of them,” she says.

Recently the United Nations Special Rapporteur Maina Kiai said the law amendments seemed motivated by a desire to control the political activities of a specific individual, rather than for objective and sustainable reasons.

“The Organic Law on Political Unions of Citizens, as amended, applies restrictions on every person in this country – and those “in business relations with them” -for the mere reason of holding political opinions. This violates the right to association, and is potentially threatening to watchdog NGOs and civil society organizations whose work could be deemed political,’ he says.

Meanwhile, the “It affects you too” campaign continues with other activities. It already has a Facebook fan page and soon a webpage will also be opened.

“It should be fixed, clarified so that we can regulate, we can have transparent party financing regulation but at the same time don’t make a threat to anybody who wants to be involved in civic and political activism,” Mathias Huter says.