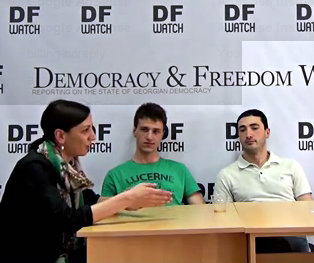 TBILISI, DFWatch–Three youth politicians told DF Watch in a recent discussion that political parties in Georgia do not pay much attention to youth problems.

On May 31, Tako Kakabadze from New Rightists Party’s youth wing, Ako Goguadze from the youth wing of the Conservatives, and David Uchadze, from youth wing of Republicans sat down at our office to talk about how to get youth more involved in politics.

Tako Kakabadze says youth nowadays are indifferent to politics and not interested in actively participating in political processes. She thinks the reason is that youth aren’t encouraged and cannot see potential in working in political parties. She also says the government doesn’t even cooperate with youth wings on the issues which concern young people.

Her colleagues share this position, but they think the reason to this is different.

Ako Goguadze from the Conservatives says youth aren’t interested in politics, because due to the little financing of political parties, youth issues aren’t a priority. He thinks this is a mistake, because in order to oversee the recent history of the country, on occasions when civic activism has been necessary, all the decisions were made with the participation of young people.

David Uchadze from the young Republicans says youth aren’t stimulated, but this is not because of financing but attitudes to youth. There is not a structured career development in a political party and during every election, political parties usually name candidates who aren’t members of the party, while they do not pay attention to young members of their party.

All three of them agree that it is necessary to change attitudes towards youth and and start valuing them as a resource, not only for putting up election posters in the streets.

They said, parties do not pay much attention to youth problems either.

According to David Uchadze, parties do not conduct polls to find out what the main problems are for young people and this interferes with preparing an appropriate policy.

Tako Kakabadze thinks the biggest problem for youth is education and employment and says that her party is actively working to prepare a strategy to deal with this. She as youth wing representative is actively involved in this work, but she also thinks that more coordination is necessary.

The guests also agree that youth organizations must be more active and have contact with other youth in order to make them get more involved in politics.