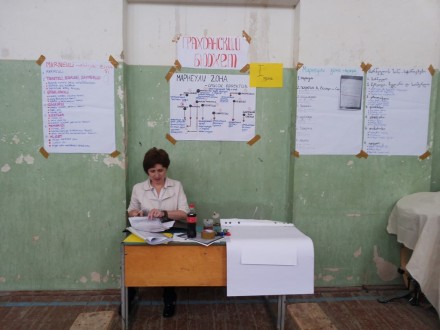 Tserakvi, DFWatch – A pilot project on participatory budgeting brings the population of Marneuli district closer to the decision-making process and brings democratic participation to a new level.

One Caucasus Festival ended on Saturday, but the organizers took steps to secure its pro-democratic overtone in the long run.

Besides numerous workshops and activities for local children and youth, an ‘open citizen council’ on participatory budgets in mostly Azerbaijani-populated Marneuli was held, attracting inhabitants from the district’s towns and villages.

“Marneuli allocated 1.5 million laris for projects written and put forward by local inhabitants,” Urszula Majewska, an employee of the Social Communication Centre of the Warsaw City Hall responsible for participatory budgeting and expert for the Other Space Foundation explains. “This project could be implemented owing to the extraordinary openness of the authorities that see a need for such a project as well as the readiness of the local population.

“Local governments usually have a feeling that they know best about the local population’s needs, but participatory budgeting and consultations are aimed exactly at assessing local needs, which ultimately brings the population and the local government closer together.”

The idea of influencing the distribution of funding isn’t entirely new in Georgia. ‘The Georgian Rural Development Fund provides a mechanism where people can propose projects — informally’, Ms Majewska explains. ‘In the case of participatory budgeting, people had to write the project, calculate the budget, and convince other inhabitants of their respective communities to support the project in order to collect necessary signatures. We conducted trainings for local NGOs, divided Marneuli municipality into three districts and conducted workshops, made needs assessments, and explained the participatory budgeting process to the local population. Later we conducted “project writing marathons”.’

In the period of half a year, the inhabitants of Marneuli district prepared 48 projects. The ‘open citizen council’ held during the One Caucasus Festival was the last moment to apply changes to the projects before submitting them to the local government.

The initiative also highlighted a special role of local women.

“The best projects were written by women,” Ms Majewska points out. “They are well-written, very often they’re printed instead of being handwritten, the budgets are very well calculated — every cost is assessed — and they’re designed with a global mind-set, like for example a support centre for dying crafts or a women’s centre with activities addressing numerous needs at the same time. Judging from our workshops, the local women are the engine of development.”

At the same time, there were cases of women who had to be accompanied by their husbands in order to participate in the workshops, which sheds light on the relatively widespread phenomenon of limited freedom of movement and cultural restrictions on public activism among local Azerbaijani women due to conservative social norms.

The projects will now be polished and financially re-assessed by the local authorities. Finally, town and village councils (sakrebulos) will choose the projects which address the local priorities in the best way to be implemented in 2016.

Representatives from an unspecified number of other municipalities followed the process and unofficially expressed their interest in bringing participatory budgeting to their districts.

“After these experiences we can start to develop more detailed rules for the future, but what is important in participatory budgeting is that such rules must always be developed jointly by the local population and the local government. We, as an external organisation, cannot impose anything,” Ms Majewska concludes.