Outrage in Tbilisi over destruction of 5,400 year old gold mine

Outrage in Tbilisi over destruction of 5,400 year old gold mine 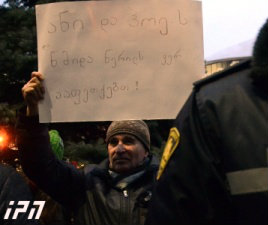 TBILISI, DFWatch–The news that a prehistoric mine has been damaged by a mining company sparked outrage in Tbilisi Tuesday. People gathered in the evening outside the National Agency on Cultural Heritage Protection to demand the Georgian culture minister’s resignation.

Culture Minister Mikheil Giorgadze is being held responsible for the destruction to the Sakdrisi site, by some described as the world’s oldest gold mine, because he gave Russian-owned RMG Gold green light to continue open-cast mining there, even though a court temporarily banned further extraction work in June, pending the outcome of a lawsuit.

Protesters from the Committee to Save Sakdrisi, Green Fist, and other concerned people say they will continue fighting to halt mining work at Sakdrisi, which was almost destroyed during explosions and other mining works carried out by RMG Gold.

The protesters plan to meet with the president and ask for his help. They also demand to publish the document based on which the status of cultural heritage was removed from Sakdrisi. Another demand is to publish all research reports, a letter written by the National Museum and every other document which were used as basis for allowing RMG to carry out mining work in the cave complex, where there have been found many tools and other traces of humans dating 5,400 years back in time.

During the rally an employee of the agency showed the middle finger to the protesters as he left the office, which led to him being escorted away by police.

Rally participants whistled and shouted at everyone entering or leaving the agency building.

Tea Oniani, head of the agency’s legal office, told journalists that they have sent all the documents about cancelling Sakdrisi’s protected status to the ombudsman and the legal group at the Georgian Young Lawyer’s Association (GYLA).

Culture Minister Mikheil Giorgadze said on the talk show Archevani on Rustavi 2 that the explosion at Sakdrisi wasn’t an ideal solution but it was the ‘most reasonable option’ in this situation. He said the decree he issued has no relation with the explosions, it only dealt with removing the cultural heritage status.

Kakha Kozhoridze, head of GYLA, told journalists that as a result of the mining blasts there is no point to continuing the court case. The case aimed at saving the site, but it has now been destroyed. The Culture Ministry didn’t allow people to save it through legal procedures he said.