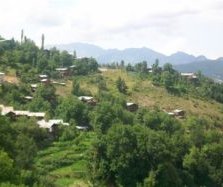 Dvani, a village in the conflict area. (Interpressnews.)

TBILISI, DFWatch–Five years after the war between Russia and Georgia, the Organization for Security and Cooperation in Europe (OSCE) has called for action to help the people in the conflict-affected areas.

Supporting political negotiations is not enough, the OSCE writes, as people in the conflict zone deserve peace, stability and the opportunity to return to their homes.

The war redrew the de facto borders around two breakaway regions and forced tens of thousand to flee from their homes.

OSCE writes that after five years, the impact of the military conflict is still visible, in Georgia and in the South Caucasus region.

The statement notes the two forms of negotiations that are taking place regularly: The Geneva talks are held between the warring parties and is a forum that focuses on security and stability, and issues of IDPs and refugees.

Secondly, the Incident Prevention and Response Mechanism, regular field meetings that deal with the daily life of people in conflict zone.

“These issues include ensuring the safety of farmers working in dangerous areas,  facilitating the search for missing persons, and finding arrangements to secure freedom of movement for people on both sides of the administrative boundary line.”

But, the organization says, supporting negotiations is not enough to solve the problems in the affected areas.

Pointing to one other measure implemented, OSCE draws attention to an EU project to repair the water supply for people.

“For the OSCE and its participating states, the conflict and its aftermath serve as a reminder of the core mandate of the Organization: to build a space of co-operative security, to respect differences, build confidence and to strive for the peaceful resolution of disputes,” it says.