OSCE calls on South Ossetia to not demolish Georgian villages

OSCE calls on South Ossetia to not demolish Georgian villages 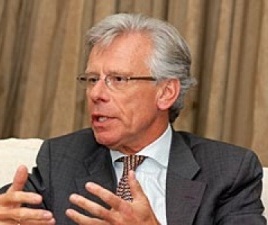 OSCE High Commissioner on National Minorities Knut Vollebæk, calls on South Ossetia to halt the demolition of Georgian villages taken over in the 2008 war. (IPN.)

Leonid Tibilov, de facto president of South Ossetia, recently stated that there are plans to tear down former Georgian villages to build industry there instead.

This applies to villages which were deserted after the Russo-Georgian war in 2008, when people left some villages. The plan is to have industry and agriculture on those properties and to even change the names of the villages in question.

“There is no need to retain names as they won’t exist as populated points anymore.”

The de facto president explains that the houses haven’t been demolished yet, but the plan is to legally register those ‘ruins’ to avoid additional questions.

“Such plans, if carried out, would eradicate what little remains of these ethnic Georgian villages in South Ossetia,” Knut Vollebæk, OSCE High Commissioner on National Minorities says.

The commissioner says houses still belong to the original population of those villages and should not be demolished.

“Under international law, the displaced people have a right to return to their homes and their property should be respected,” he adds.

But if the plan should still implemented, this will be crime under international law.

“I call on the de facto leadership and relevant authorities in control of this area to respect the property rights of displaced persons and to fulfill their obligations under international law,” Knut Vollebæk says.

“Statements calling for the complete demolition of villages traditionally inhabited by ethnic-Georgians are provocative in this highly volatile region and, if actually carried out, could result in there being no ethnic-Georgians left in South Ossetia. Apart from being a potentially criminal act, such a step will certainly constitute an impediment to peace and stability in the region.”

Georgia’s Foreign Affairs Ministry calls on the international community to pay attention to the statements of the de facto regime. According to the ministry, this will apply to the villages Kurta, Kekhvi, Achabeti and Tamarasheni.

“These predominantly Georgian villages were ethnically cleansed, torched and partially destroyed during the August 2008 war with the Russian Federation by the South Ossetian militias under protection and with direct aid of the invading armed forces of the Russian Federation. This destruction has been documented by many international observers, including the fact finding mission of the Organization for Democratic Institutions and Human Rights (ODIHR) and the High Commissioner on National Minorities (HCNM) in late 2008.”