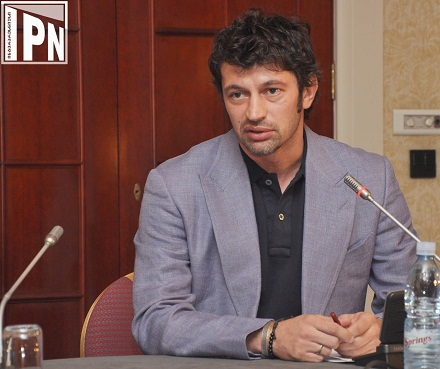 Kakhi Kaladze, a former professional player for AC Milan, is trying to organize a friendship match in Tbilisi, but can't get permission to use a stadium. (IPN.)

TBILISI, DFWatch – Former AC Milan player who left football to go into politics was planning to hold a friendship match with Milan in Georgia as a symbol of him leaving, but Georgia refused to make a stadium available for the match.

Kakhi Kaladze, who now is a partner of Bidzina Ivanishvili, leader of the opposition Georgian Dream coalition, Friday stated that a match was planned for September 13, but a stadium has not yet been booked.

He said it was already agreed to bring the Milan team to Georgia and play a friendship match, but yesterday they received official refusal.

“They told us that the stadium schedule is planned for the next one months and every day is busy.”

Kaladze promised that he will still play a goodbye match in October, when Georgian Dream will come in government after the elections.

Kakhi Kaladze played for AC Milan from 2001 to 2010. He the played for Genoa from 2010 to 2012. With Milan he won the Champions League twice, the UEFA Super Cup once and the FIFA Club World Cup once.

In December, 2011 he announced that he was leaving football in order to join Bidzina Ivanishvili’s political movement. Since then the former football player has faced many problems, including being fined with 17 million lari for withdrawing cash from his own bank account, and he was denied the right to appeal the decision in court.

During his career, there was a match on September 5, 2009, against Italy. It was part of the 2010 World Cup qualifications. Kaladze was national team captain. He scored two own goals and the team lost to Italy with 2-0.

While talking about his political competitors, the president never mentions by name opposition leaders and representatives. This time he said that there are different competitors, but today some competitor came to the country to create misunderstanding while saying it is not important where the country will go – with Europe, Russia or America.

“We should be there where Georgia will be safe, where our territorial integrity won’t be questioned. The one who says ‘it is not important who started the war’ – for them it is not important where they will score goal. A brigade of own goal scorers raids Georgia and they will never win. If you say that we are guilty for the war, you try to score own goal,” president said.

Kaladze responded on his Facebook page by saying that he doesn’t consider Saakashvili the country’s president.

“He is president of the National Movement. to be honest, I’m not interested in what he does or what he will do.”

Kaladze has apologized a number of times for his own goals to the national team and to the country.