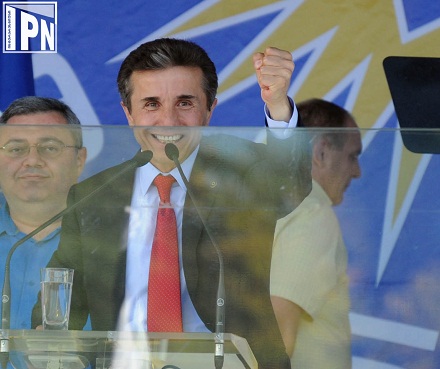 Bidzina Ivanishvili addressed a crowd of over a hunded thousand people at Freedom Square in Tbilisi Saturday, as two days remain until the parliamentary election. (IPN.)

TBILISI, DFWatch – The Georgian Dream coalition which is challenging President Saakashvili’s power in Monday’s parliamentary election, mobilized over a hundred thousand supporters in the center of Tbilisi Saturday.

The coalition also held a rally in the country’s second largest city Kutaisi.

Thousands of people marched starting from four different locations in Tbilisi, and convened on Freedom Square, where coalition leader Bidzina Ivanishvili addressed the crowd. Afterwards, his rapper son Bera saluted the audience and gave a short live performance, and then people left for home.

At the end of his speech, Ivanishvili called on people to go and vote on Monday to secure a Georgian Dream victory.

In his speech, the coalition leader once again responded to the recent prison torture scandal, saying that everybody knew well what was happening at jails.

“They’ve been building this for nine years,” he said, adding that people have already made a choice, “the system should be destroyed. This is already an international scandal. It’s not possible that the West supports this government.”

Ivanishvili spoke about his future plans, appealing to different groups of people, teachers, soldiers, police and refugees and thanked them for their support. 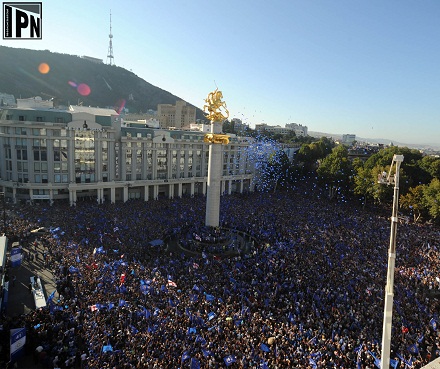 “At the end I want to thank one more person, who managed and by his own steps he made it possible for me to tear of the mask from my opponent and I showed till the end to whole world what our violent president is.”

The event started at 4 pm and lasted for about two hours.

“I’m so exited people have awaken at last,” a lady of about 60 told DF Watch. She said she was tired from demonstrating all the way from Vake Park, which is about an hour’s walk from Freedom Square.

“I don’t mean only the last few days when this scandal went on in the country, but earlier too. Do you remember Bidzina’s first rally, so many people came and not a single incident took place then, like today,” she said.

Some came with children, showing up the whole family together to support the coalition.

Freedom Square was filled by the crowd, making it hard to even walk, while whole Rustaveli Avenue was also filled up of people gathered around small screens to watch the leader speaking.

There were many people in Kutaisi as well. Youth were standing in water in a fountain, as there was not enough space for them on the square, local journalists report. On a large screen people in Kutaisi watched the coalition leader’s speech live. Majoriatarian candidates for parliament for the western region also addressed supporters in Kutaisi.

Meanwhile, President Mikheil Saakashvili, who also heads the ruling National Movement party, met with locals in Ozurgeti, a small town in the Guria region in the west.

“It’s not just a gathering of people. Here are gathered persons, honorable persons gathered, but for those who count, who thinks they frightened the defenders of Georgia’s future, should open their eyes and look at this square to understand that there are too many of us, we are more than they are. We are way more than those people, who don’t even think of the main [question]: what is happening now in Georgia,” Saakashvili said.

The ruling party yesterday held a large rally in Tbilisi. In the morning, the president also greeted supporters in the Black Sea port city Batumi.