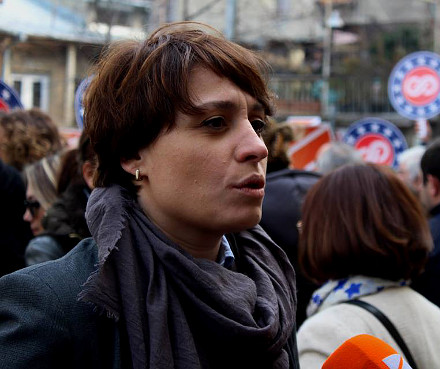 Elene Khoshtaria was nominated by European Georgia as candidate for Tbilisi mayor. (Facebook.)

The European Dream party congress nominated Elene Khoshtaria (37) as mayoral candidate as political parties are gearing up for the local elections.

The serving mayor of the capital Davit Narmania is unpopular, and the ruling Georgian Dream party is searching among its ranks for a replacement that can defeat the challengers, three of whom are considered to have at least a theoretical chance.

There is Nika Melia, from Khostaria’s former party the National Movement. He ran unsuccessfully against Narmania in 2013, but hasn’t given up and has appeared regularly seen in the news in the intervening years with his trademark clean-shaven head and rapper style.

It is still possible that Tbilisians may see a re-run between the two, as the sitting mayor has not yet said if he will be a candidate or not. But it is most likely that Narmania will be assigned to some other position, while Georgian Dream most likely will nominate candidate Energy Minister Kakha Kaladze for mayor, according to media reports.

However, a source close to Narmania’s inner circle told DFWatch that he hasn’t been fully excluded from the post yet; there are active consultations in the ruling party about whom to name for Tbilisi mayor.

The wildcard candidate is independent member of Tbilisi City Council Alexandre Elisashvili, a popular environmental activist who has spoken out against City Hall on many occasions. Like the mayor, he has still to announce his candidacy but if he decides to run, his impressive victory in the previous election, where he secured his seat in City Council, coupled with a widespread disappointment with the largest political parties among the population, grants him a formidable momentum.