Political clash outside UNM office in Batumi, one detained

Political clash outside UNM office in Batumi, one detained 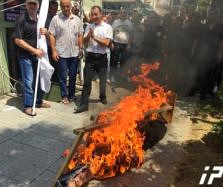 TBILISI, DFWatch–One person was detained in western Georgia on Thursday,  after a fight broke out in front of the local branch office of the National Movement (UNM).

Protesters from the organization Our Homeland burned an effigy of ex-President Mikheil Saakashvili, the National Movement leader, and this led to a fight between them and UNM activists.

Interpressnews reports that more than 300 people were gathered at the office and a member of Our Homeland was detained for administrative offenses. He was arrested for petty hooliganism and disobeying police orders.

Our Homeland activists protested because they don’t want the UNM regime back. They called UNM members traitors’.