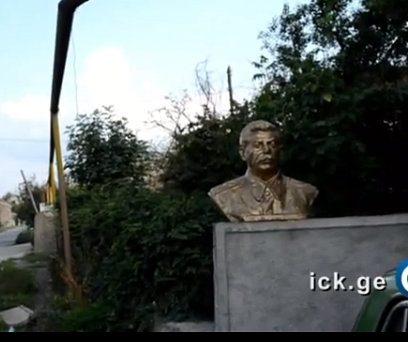 TBILISI, DFWatch–A new Stalin bust has appeared in the village Vanta in Kakheti. It stands on the fence of one of the houses, in front of a shop.

Dali Kirvalidze, a resident in the house with the fence, says strangers installed the bust without their permission when the family was absent, according to Information Center of Kakheti (ICK).

“I don’t know anything. You must ask the men. I’m a woman and I cannot not take it away myself,” she said.

The neighbors say they don’t know who put up the new bust.

Many monuments from the Soviet era were removed during the Saakashvili regime, but after the change of government in 2012, Stalin statues have been reinstalled in many towns and villages.

The first to appear was a monument in the village Alvani, also in Kakheti, in November 2012. It had been dismantled during the Saakashvili government in June, 2011.

Another Stalin statue was put up in the village Akura in Kakheti, in January 2013, but it was later torn down and painted pink by people protesting against the resurrection of Stalin statues. The one in Alvana was also painted pink.

September 1, local elderly people gathered money to rehabilitate a Stalin monument in the town Telavi in Kakheti. The same evening it was painted in orange. There are claims that the people who put up the monument did not have a building permit. The local government in Telavi ordered it dismantled and gave a five day deadline to take it down.