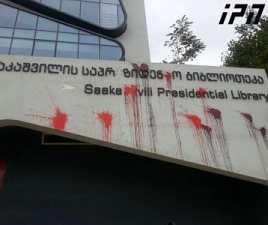 TBILISI, DFWatch–More footage of rape and torture was published on a Ukrainian website Thursday evening, as attacks on the former ruling party’s offices continue throughout Georgia.

Members and supporters of the National Movement believe that the footage is being released now in order to draw attention away from an ongoing trial about the ownership of the television company Rustavi 2 and negotiations with Gazprom.

A Ukrainian portal has published a video titled “Why Saakashvili is mute”. The nine minute clip shows a man being raped by another man wearing a mask. At the end, he seems to be coerced into confession.

The website also re-published another video, which was first posted a few days ago on another Ukrainian website and then removed.

Since publishing the first scandalous video, several of the National Movement’s offices have been attacked. Red paint, notes like “ban the National Movement’, throwing eggs or even welding an entrance door shut are some of the means used in the attacks on offices in Batumi, Poti, Zugdidi, Tbilisi, Lanchkhuti, Gori, Kutaisi, Ozurgeti and Rustavi.

The Interior Ministry has launched an investigation into how the previous video was leaked. The Prosecutor General’s Office says they have been investigating the abuse shown in the videos since the government discovered a secret underground cache containing footage of torture in Samegrelo in the summer of 2013.

The videos appear to show the rough interrogation methods that were used while the National Movement was in power, when violence and rape was used to force suspects into confessing, and conviction rates were close to a hundred percent.

Prime Minister Irakli Garibashvili on Thursday once again commented on this issue by saying that he is surprised that experts, politicians and journalists are focusing on how the footage was released instead of what was happening in Georgia in the years the abuse took place.

“These people, I guess, do not understand that no-one can destroy such footage. They are necessary for investigation and stored at the Prosecutor General’s Office. I also know that copies have been given to the defense and prosecution,” he said.

The PM claimed that the National Movement is releasing the videos out of ‘commercial interests.’

Garibashvili called on the National Movement to apologize to people. “They must be grateful that people haven’t done the same to them as what is shown in this footage, during these three years. This might be a harsh [thing to say], but they deserve it. They haven’t been able to appreciate our democratic attitude,” he added.

Giorgi Vashadze from the National Movement Wednesday said that Georgian Dream is on the edge of ‘bankruptcy’.

“Instead of economic development and doing real work they prefer manipulate people with this filth,” he said, adding that the Georgian Dream was successful in doing the same thing right before the parliamentary election on October 1, 2012, when videos of torture and rape in jails were handed to the media and shown on TV.

Tuesday, nine local non-governmental organizations, including Transparency International Georgia, Georgian young Lawyers’ Association, Education and Monitoring Center and Identoba, published a joint statement indicating that the compromising videos are being used for political purposes which they consider unacceptable, particularly when the footage is screened in public places without censoring the disturbing scenes.