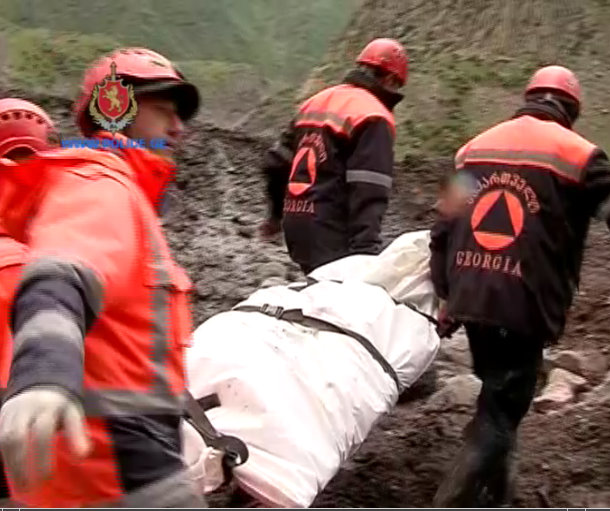 A second person has been found dead after the catastrophic landslide in Georgia on May 17. (police.ge)

TBILISI, DFWatch–One of the victims in the May 17 Dariali landslide has been found dead inside a tunnel that was dug out in connection with an ongoing hydro power development in the valley.

The body most likely belongs to a truck driver, according to rescue workers, but it has not yet been identified.

It was discovered along with parts of one of the trailer trucks which were caught under the landslide.

This is the second confirmed death in the catastrophe. The search for survivors is continuing 24 hours a day. Five people are still missing.

The European Commission is sending Lithuanian and Austrian experts to examine the area for ten days together with Georgian geologists.

Kakhi Kaladze, Vice Prime Minister and Energy Minister, told journalists on Friday that the first thing which was done in Dariali after the disaster was to get the river Tergi back into its own bed, which made it easier to carry on with the clean-up.

“Several trucks were caught under the landslide and in a few days when the clean-up work is over we will have complete information about the victims,” he said.