One dead in mine explosion in Georgia

One dead in mine explosion in Georgia 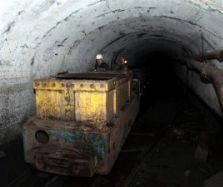 TBILISI, DFWatch–One person has died after an explosion in a mine in Chiatura, a town in the central parts of Georgia.

This is sixth person who have died while working in the manganese mines the last three years. 11 have been so severely injured that they are unable to work. During these years there have been many rallies by mine workers who demand improved conditions and increased salaries.

The last large scale rally was held when Bidzina Ivanishvili’s government came to power. The workers received a promise that their work conditions would improve.

The explosion took place late night on Monday. Representatives of Georgian Manganese, which owns mines in Chiatura, say that the victim is the worker Shalva Darbaidze.

The mine workers explain that Darbaidze was preparing a wick, when the roof collapsed and a rock fell over him and he died on the spot. A criminal investigation has been launched into the incident.