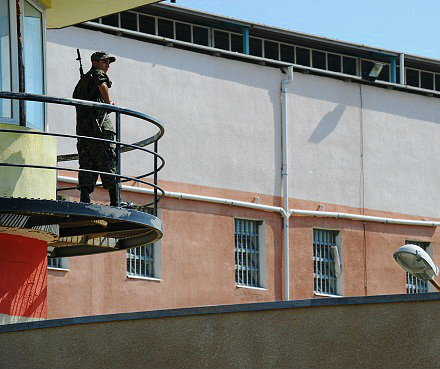 TBILISI, DFWatch–Georgia’s ombudsman claims they have reason to believe prisoners were tortured last week at a prison in Gldani, Tbilisi; the very same prison where humiliating abuse of prisoners was filmed and shown on TV two years ago.

The public defender on Wednesday appealed to the Prison Ministry to study the incident as a possible crime.

November 12, trustees of the ombudsman heard shouting and noise that seemed like fighting during an inspection of Gldani prison (“No 8”).

When they went to the spot, prison employees and the prison’s deputy director met them there. The ombudsman’s representatives noticed traces of blood in the hall and claim that apparently the prison staff became angry seeing them coming.

Then they asked to be allowed access to the bathroom where the noise was coming from.

The statement reads that one prisoner and one accused both were lying on the floor in wet clothes. The accused had his hands and feet chained together with a special chain. Both of the prisoners had injuries, including in the face and forehead, and there was blood coming out of the wounds.

The ombudsman asks the Prison Ministry and the Prosecutor’s Office to timely conduct a forensic examination of these bodily injuries and what might have caused them.

The Prison Ministry refused to answer questions from journalists but stated that they will soon be publish a response.

Torture in prisons is a sensitive issue in Georgia. In September, 2012, video footage was leaked in the media showing physical, psychological and sexual abuse of prisoners, mostly in Gldani prison (“No 8”), but at other facilities as well. This resulted in weeks of street protests involving hundreds of thousands of people and the defeat of the National Movement party in the parliamentary election.

To international media it looked like an “October surprise”, but prisoner mistreatment was in fact well-known before these events and had been documented in reports by observers from the Ombudsman’s Office, the Council of Europe and the United Nations, as well as reports in Georgian media. So contentious was the issue to ordinary Georgians that a series of street protests gathered thousands of people every week in spring 2011 under the slogan “I am a prisoner too”.

After the change of government, the new parliament passed a mass amnesty which emptied more than half of the prisons in Georgia.

The Prison Ministry responded by writing that it would have been better if the Ombudsman’s Office had ‘timely’ informed them about this incident, because reporting about it a few days late reduced the possibility of timely conducting a forensic examination and determine the bodily injuries.

If the general Inspection reports that employees at Gldani prison violated the Criminal Code, material about the case will be sent to the Prosecutor’s Office. The investigative department of the ministry has launched an investigation into the case and since there is a high public interest in it, the deputy prison minister on Wednesday offered the ombudsman to accompany them for a meeting with the affected prisoners to get information about what happened.