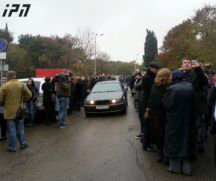 TBILISI, DFWatch–The body of the former Economy Minister Kakha Bendukidze, who recently died of heart failure according to preliminary information, will be brought home to Georgia on Thursday.

The body will be on a direct flight from London and brought to his parents’ house on Mosashvili Street in Tbilisi, where there will be held public funeral rites.

Funeral rites will also be held at the Free University, one of the universities which Bendukidze founded. His body will be brought to the university campus on Saturday, and the same day he will be buried at Kukia cemetery, in accordance with his own wishes.

Bendukidze died November 13 in London at the age of 58, two weeks after he underwent a heart stenting operation in Switzerland. https://dfwatch.net/rose-revolution-ideologue-dies-of-heart-failure-in-london-40817

An autopsy was conducted in London and the findings will become public in a few weeks.