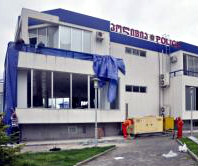 The incident took place at the police station in Gldani, north Tbilisi. (Interpressnews.)

TBILISI, DFWatch–The Georgian ombudsman has asked the Prosecutor’s Office to investigate an incident of possible mistreatment by police.

On Monday, the Ombudsman’s Office reported that a citizen, whose name is mentioned by initials, was detained July 1, 2014, by the police and taken to the police station in Gldani, in the north of Tbilisi. When there, he was chained to a chair and beaten.

According to a report by the National Forensic Bureau and the protocol from visual observation in the detention cell, the detainee had injuries.

The ombudsman believes that if the Interior Ministry investigates a crime committed by employees of one of its own bodies, it cannot provide the quality necessary for an effective investigation. It would therefore be reasonable if the Prosecutor’s Office investigated the case.

Law enforcement bodies have so far not responded to the ombudsman.