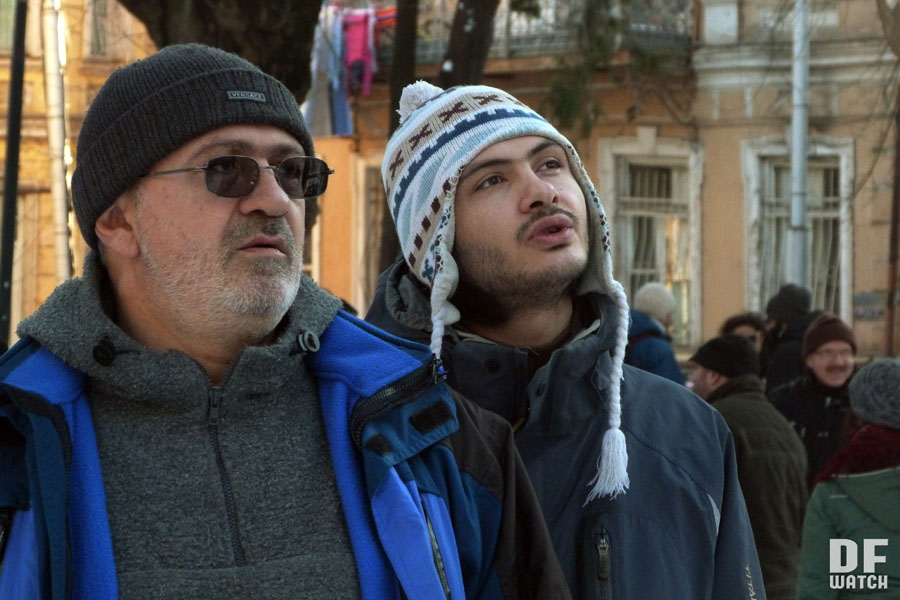 Every two weeks people gather on Gudiashvili Square in Old Tbilisi to ask the city authorities to guarantee that the area's historic qualities are preserved when it is modernized. (Photo: Mari Nikuradze.)

TBILISI, DFWatch – Tbilisi’s old Gudiashvili Square was fully covered with white snow on Sunday as people showed up to defend it once more from an uncertain fate.

Even though it was a freezing minus five degrees, people still gathered on the square on February 12 at what has become a habitual biweekly gathering.

Unlike previously, there were no performances on Sunday. Organizers considered delaying the whole event due to bad weather and snow, but people insisted to come at least for hour to express their protest and repeat the demands they have been voicing for more than a month.

The square and its surrounding buildings are sorely in need of rehabilitation or else will be in danger of deteriorating beyond repair.

“There are two things we demand: A public meeting where they show documentation that they really have a rehabilitation project and are going to implement it; and documents that show that the authenticity will be retained and that immediate reinforcement works will start,” says Aleko Elisashvili, one of the organizers, He adds that the snow puts these buildings in more danger.

People started coming here at 16:00. Children came with sleds playing in the snow. Hot grog cheers up people in the freezing day. No bands were singing, no market, no performances, but around 70 people gave gathered around, standing in groups discussing.

“Sitting at home, doing nothing, same every day. I decided to come here. Gudiashvili square is remarkable today, because it’s white, irreproachable. My friends are here,” Tee says to DF Watch. 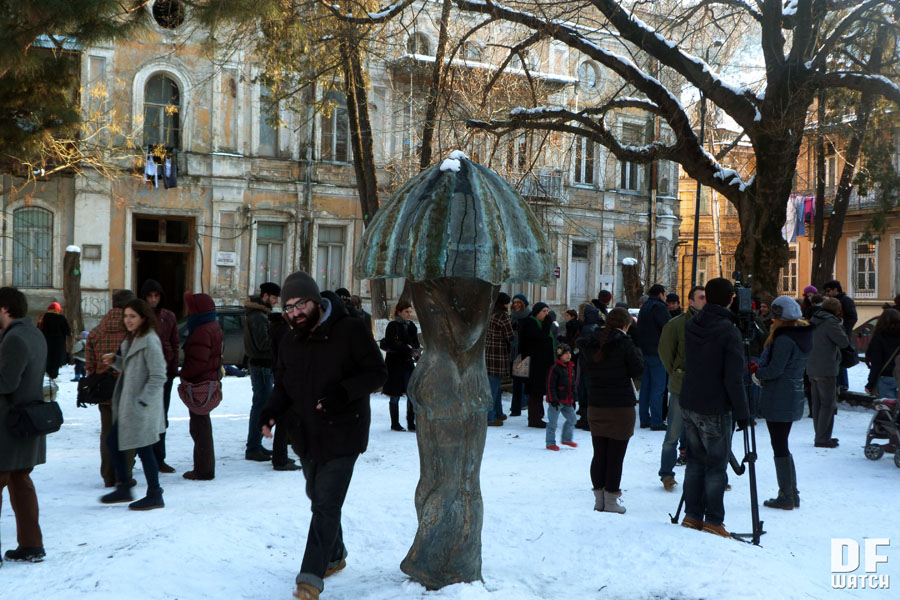 Mayor Gigi Ugulava recently told the magazine Tabula that one of his highest priorities is to rehabilitate Old Tbilisi, but protesters are suspicios. "Talking is one thing, and the pictures published on their website is another. Real documentation is needed,” says organizer Aleko Elisashvili. (Photo: Mari Nikuradze.)

“It’s a neutral place where everyone is coming; it has become a tradition, a nice tradition with a good goal. We just want to retain the beautiful and historical face of this square, which we all love so much. We don’t demand a miracle, but to rehabilitate the square and reinforce the buildings. That’s all,” says Lika, one of the activists.

In an interview with weekly magazine Tabula, Gigi Ugulava, the mayor of Tbilisi, says that one of the first priorities for them is to rehabilitate old Tbilisi.

“The processed project with such huge working pictures is never uploaded on the webpage,” he says, adding that Tbilisi City Hall have made enough explanations regarding this.

The illustrations for the future rehabilitation of Gudiashvili Square are published on the website of City Hall together with an appeal responding to the protesters that without agreement of Tbilisi City Hall no project will be implemented.

Currently it says that Tbilisi City Hall has an agreement with the Company Irao Magnat Gudiashvili, which will implement the project.

However, when activists requested this project plan the copy they received did not contain the full document. Very important pages are missing, they say; the ones which will make it clear whether the authenticity will be retained or not.

Later, they received the Georgian version of the agreement; however, this time only one out of eight appendices were included with the agreement.

“City Hall now makes more explanations regarding Gudiashvili Square, but we have suspicions. They say they will retain the authenticity. it’s precious for them, even Ugulava himself, the mayor talks about it, but talking is one thing, and the pictures published on their website is another; real documentation is needed,” Elisashvili says.

Until the demands are met, Elisashvili says, the protests will continue once every two weeks, as it has been until now.

Another meeting is planned for March, 2012, with the responsible party of Gudiashvili.