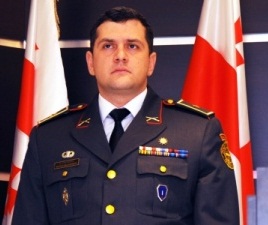 General Giorgi Kalandadze has been suspended as he awaits trial for allegedly abusing subordinates. (IPN.)

TBILISI, DFWatch — Two military officers who were detained together with a former interior minister for abuse of powers, were on Sunday suspended.

Giorgi Kalandadze a month ago was appointed to the post of head of the general headquarters. November 7 he was detained together with Bacho Akhalaia, a close Saakashvili ally and former interior, defense and prison minister; and Zurab Shamatava, commander of the fourth brigade of Georgia’s armed forces.

The court decided to release the officers against a USD 12 000 bail, but Akhalaia was put in pre-trial detention until the first pre-trial hearing December 25.

When Giorgi Kalandadze was released, president Mikheil Saakashvili invited him to his palace and in a video posted online could be heard telling the general to return to work as head of the general headquarters. The president has authority to appoint and dismiss a person from this post.

But the prosecutor’s office asked the city court to suspend the two officers on trial for abusing their subordinates, a request which the court granted.

The fact that Georgia was without a head of its general headquarters caused NATO to postpone a meeting of its Georgia commission, but the defense ministry promised to continue cooperation with allies and partners and take steps forward on the way to NATO integration.

Vakhtang Kapanadze, deputy head of the general headquarters, has now stepped in for Giorgi Kalandadze.