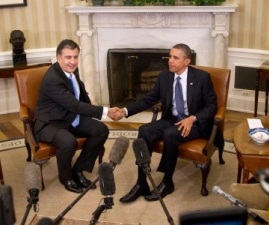 TBILISI, DFWatch – Political Tbilisi is grabbing on to a phrase used by U.S. President Barack Obama yesterday after meeting the Georgian president Mikheil Saakashvili about having a transfer of power after this falls parliamentary election in Georgia.

“I want to express my appreciation for the work that’s been done in the past, but also anticipating fair and free elections here; the formal transfer of power that will be taking place in Georgia, which I think will solidify many of these reforms that have already taken place,” Barack Obama said at a press conference after the two had met at the Oval Office of the White House.

Manana Manjgaladze, press spokesperson for the president’s administration, also commented on this issue at today’s briefing.

She says that the government will only be elected in a free and democratic way.

“Any government will be elected through a democratic way. The Georgian president also mentioned that Georgia is going towards a principally new model, where parliament will play a bigger role, and the next parliamentary elections will be very important and interesting in this direction,” she said.